Low Stats Are Good, Too

Here's the Random Wizard on G+:

I have been noodling over trying to make a system where having a low score is not necessarily a bad thing. It is easy for Charisma. You can make a low Charisma score = fearsome. Not so sure what could be done for the other ability scores...

DEX is bodily dexterity (AC, climbing, stealth), and low DEX = high CON (physical steadiness, tankitude). So we collapse those two stats into one.

You can get hit points from high DEX (dodge points) or low DEX (tank points). Outstanding.

High INT is book larnin'. Low INT is street smarts. Your players aren't morons, why should their characters be?

High WISdom is awareness and sensitivity. Low WISdom is willpower and steadiness. Probably it needs a different name - Awareness, Perception, Openness? but then it did already.

A cleric can draw on either extreme. Illustration: 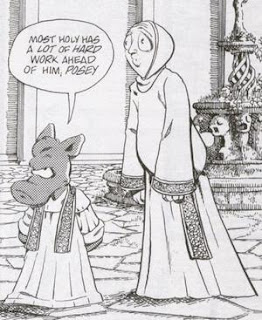 1. Adventurers are exceptional. In any given domain they either have something going for them, or are totally average.
2. Some traits like muscle mass and fine motor skills are inversely correlated. Probably no more unrealistic than the default assumption that all skills are completely uncorrelated (most glaringly STR and CON). Again, would a complete weakling and klutz really set out on the path of adventure?
3. Characters can still (quite unlikely) be boring, but rarely useless.

Email ThisBlogThis!Share to TwitterShare to FacebookShare to Pinterest
Labels: abilities