In these pandemic times, I have summoned seven redoubtable players from my previous one-shot games and campaigns to join in a weekly online game, following the path of least resistance to Roll20 and the well-supported, and still world's most popular, 5th edition D&D. For this year's One Page contest I thought I'd work-up an area based on the campaign.

Here I must ask my current players to look no further! 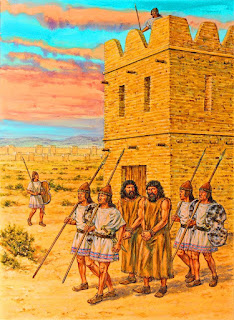 The campaign is set in a region of Mittellus, far away from where eight years ago the Game of Iron campaign began. It is a desert-ringed land, culturally combining ancient Egypt and Mesopotamia, the ruling empire a torpid and death-obsessed metropolis amid concentric canals that divert its life-giving river. There is more promise in the vassal kingdoms. The campaign began at the edge of one of these, Wahattu, which had recently seen its neighbor Dulsharna fall to incursions of gnolls. 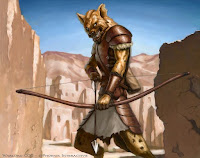 My principal goal was to make this campaign last longer in game time than previous ones, which had compressed three or more years of real-time play into less than a game-year. To this end, characters would spend months between levels training up. I also wanted to give the players more of a stake in the land by having them sponsor and economically improve the last bordering village, Alakran.

After about 12 sessions they have had some outdoor and social adventures, and run through two adapted scenarios I placed in the map (Jason Morningstar's Khas Fara from Fight on! #2, their introduction to Alarkan; and following a newly dry streambed to relieve a family of flying camels from drought, they found it had been diverted to feed the fell doings of the Sinister Shroom, whose Pod Caverns lay below).

I might have more to say about this low-level economic game, and about 5th edition in general. later on. But right now, here's the entry ... wherein the players have only ventured to, and been soundly thrashed in, the bronze cedar tomb. 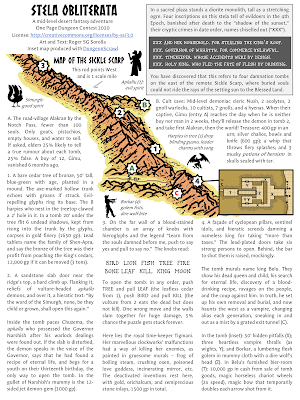