A while back I posted about the idea to use spellbooks from the defunct collectible card game Zatch Bell as a lodging for players' spell cards. It required a little resizing to the skinny card sleeves they have but I'm now proud to say that the player of Sivir the Elf now carries her four spells in a little gray book. And will never again forget how Sleep works ... right?

Two years ago I posted a long series reworking the standard spell lists that had remained much the same across editions of D&D. Later, I tried boiling the spell list down to the most essential spells and stating them as single cards. This time around the spell list is expanded, some of the dog spells thrown out (Temptation/Fortitude anyone?) and I think it's a good time to go two by two through the card-based spells I use in my current games.

The one thing I'm missing, I think, is crazy-ass spells. Stuff like Tobias' Obeisant Simian Valet from the New York Red Box campaigns, or Matt Finch's Strange Waters spell that got into Flame Princess. Always looking for the good suggestions on those. But now, on to the mundane stuff...

The number in parentheses is the caster level required to cast the spell; the range of both of these is sight, 30' and they represent the Yellow School of Change and the Red School of Energy. 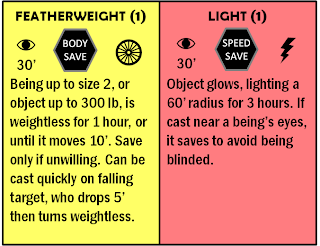 Featherweight is the ultimate repurposing of the Feather Fall spell. Brendan on Untimately has recently posted some good insights about how OD&D spells can be understood like equipment, solutions for specific exploration problems like locked doors and illegible inscriptions. Well, if that approach to spells is Phillips-head screwdriver for Phillips-head screw, I want spells to be more like Swiss Army knives with strange emergent properties.

Players in my games have used Featherlight to cross a pit in the course of escaping a troll - who nonetheless batted them around like a party balloon - and to make opening a secret door that much easier. Nobody's yet had the chance to use the Wiley Coyote gambit ... cast it on the big bad monster, push it back with a pole over the cliff edge until 10' has passed, and then bye-bye. By the way, it's "weightless" in the sense of  "zero gravity," so that monster will still exert force and do damage as normal. (Even more devious, find yourself a 300 lb weight in the dungeon, go stand by it and yell until something comes along; then toss it up until it has flown 10' in the air, and run like hell.)

With Light, I cut to the chase and make provisions for its offensive use. Straightforward enough, but both of these spells with a little luck and ingenuity can get even a beginning party out of an out-of-level monster encounter in a jiffy. I guess if you see spells-as-equipment, then these represent the kind of creative uses of equipment that are the pinnacle of Old School play style.
Posted by Roger G-S at 23:13