I guess it's another Monster Monday.

"Jenny Haniver" is a term with any number of possible etymological fathers but no clear origin. It refers to folk-art creations of sailors in the medium of dried skate (the fish), purporting to be preserved carcasses of fantastical monsters. 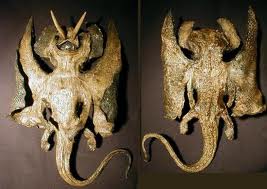 Sometimes a Haniver is made in a squid-headed humanoid form, further reinforcing age-old tales ...

of humanoid creatures under the sea with pointed and tonsured heads ... 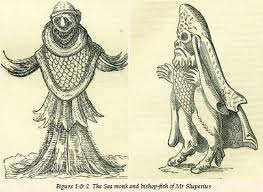 argued by the eminent Danish scholar of cephalopods, Japetus Steenstrup*, to be little more than misidentified giant squid: 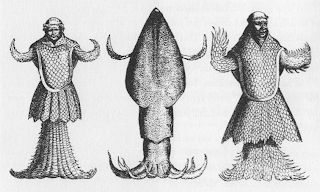 But we know better, don't we? We know about the morkoth. Does this look like a Jenny Haniver to you?

This is a curious flying marine predator of far-away climes, with leathery skin, about the size of a small cat. They travel in flocks and are known to leap on board a ship en masse to harass and bite the crew. For this eventuality, wise captains keep stocks of netting on board when sailing haniverous waters. They mummify easily and some sailors make a living from selling them.

These gregarious creatures collect in small communities to farm seaweed, raise sea snails, and serve various undersea deities, with some "abbeys" being lawful and some more sinister. Lairs are often guarded by 1d6 monk seals.

Be they pious or debauched, these creatures have a strong connection to the kind of deities worshipped by sea monks, but prefer to lead and advise others rather than group together. They can be found in communities of sea monks, mermen, tritons, locathah, or sahuagin. In danger they can spew a 20' radius ink cloud in the water to confuse enemies and make good their escape.

* As far as I can tell Steenstrup and "Mr. Sluperius" were real guys and not fake tome authors from an off-brand Mythos tale.