I posted a while back, about whether GMs should insist that players only say things that their characters would actually say. Now, in house we have been watching the History Channel's Vikings series, and while it's not a perfect portrayal, it has a lot of things to say about warrior societies. One of those things that bears on the gaming issues happens in episode 3, when our titular Vikings meet armed men of England for the first time.

Around 00:50 in the above clip we see the two sides warily approaching each other to parley. It's a familiar situation to adventure game players - the one person in the party who speaks the others' language steps up and starts talking. Here, it's the raid's leader Ragnar who speaks Old English, while the language gap is underscored by having the Vikings speak among themselves in subtitled Old Norse.

Then, another familiar situation happens. The Vikings start to disagree and argue in front of the opposition. Some distrust them and want to fight instead of talk. The English, not the most confident warriors, get nervous. They yield more to show good will, the leader even giving up the chain around his neck, but that only shows weakness. With one rash act, Floki, the Viking band's force of chaos, rips the cross from another man's neck, and negotiations have decisively failed. 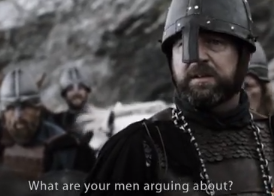 This superb scene shows game runners how to handle such a situation. A party that shows discipline and skill, letting the chosen caller talk, will naturally inspire more confidence than one that interrupts the spokesperson, or pulls out of negotiations to huddle. It's really the same principle, on a collective level, that makes us more trusting of individuals who speak quickly and with confidence. Thus, based on player actions the GM can levy a penalty to the reaction roll, and make clear that the dithering and bickering is having a negative impact on their presentation. It's not about blocking choices, but setting up consequences.

The scene also shows the cost of concessions when dealing with a warlike folk. Bribes and offers must be dealt out from a position of strength. Too eager to please, and the calculation becomes that you are afraid and will be easily defeated - so why not try? In this case it would be reasonable for appeasement to have a negative, not positive, effect on reaction rolls.
Posted by Roger G-S at 21:34