Pure body horror only goes skin deep. Although Junji Ito's stories sometimes try for little more than pure gross-out (most successfully in Glyceride, with its palpable conflation of grease, fat, meat and acne) the best ones touch on psychological anxieties below the surface.

Western stories often present the loss of individuality as a horrific fate. In Poe it's the 19th century horror that a gentleman's reputation might be ruined by a debauched double, in The Case of Mr. Pelham, possibly the best episode of Alfred Hitchcock Presents (by Cockrell and Armstrong), it's the 20th century horror that your salaryman double might be better, more confident, harder working than you. Think about the end of 1984, or of The Stepford Wives.

Junji Ito sometimes writes from the other point of view. What if the horror is not to lose your individuality, but to have it?  What if the monster is personalized; what if the horror is not in being forgotten, but in being targeted and sought out? Japanese culture may be particularly sensitive to this question, as its collectivist tradition collides with a postwar individualist modernity.

Enigma of Amigara Fault (previously) and Hanging Balloons both evoke the horror of individuality. In Enigma, perfectly personalized holes in the rock call out to people, seducing and ultimately warping them. In Balloons, large balloons with the faces of individuals appear, pursuing their originals with pendant nooses and relentless cunning. Despite their preposterous premises, both stories succeed in haunting the reader with unease, a clue that deeper allegories are at work here.

The Internet uses personal data as a kind of soul you can sign away for content and functionality and connectivity. But it seems that people only get creeped out when reminded explicitly who has their data - when Google puts up an ad that's a little too close to the content of one of your emails. And in the case of identity theft, or getting doxxed, the creepy becomes frightening. Ito's stories from the 90's prefigure the anxieties of hyper-personalization. Significantly, the first victim of the Hanging Balloons is a celebrity; fame as a curse. 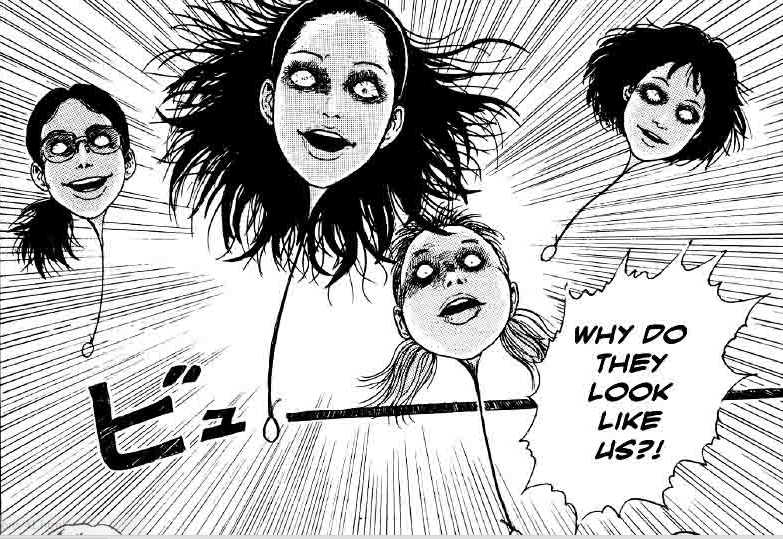 In gaming it is all too easy to put the players in the eye of peril, thanks to the omniscience of the game master. One of the best instances is in Death Frost Doom when the characters find a portrait of themselves. The doppleganger is a well-known adversary, and the corny plot hook of being the "ones spoken of in prophecy" can have as much dread as promise resting in it..

A particularly evil twist would be to confront the party not with their exact doubles, but with a group of rivals that by coincidence duplicates their class and character concepts ... only with a turn toward the cliche side. The fair and noble warrior becomes a bland do-gooder, the sneaky thief has the brooding and antiheroic angst turned up off the dial, and so on. Who dares steal the most vital element of player character identification - individuality?

If modern individuality is scary in Ito's world, so is tradition. I wish I could just erase time and have "human centipede" refer instead to the monster in My Dear Ancestors. This less gross, more disturbing insect is made up of a centuries-old chain of brains, skulls and hair, each one growing on the next head (literally) of the family. The allegory about the dead weight of obligation is heavy, but not heavy-handed, as the lineage-beast is revealed as the sinister force behind its only heir's courtship of our heroine.  The composite creature practically writes itself as a monster, and in a world of wizardry, might represent an accumulation of power to rival even the oldest lich. 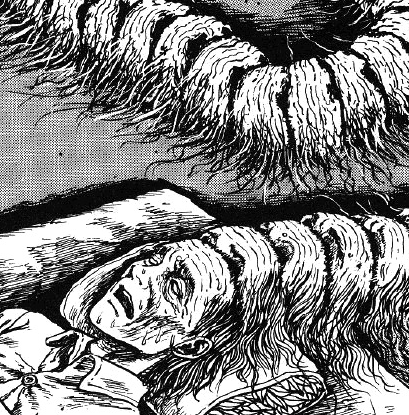 Ito's psychological adroitness comes through even in the stories that fail. In Ice Cream Bus, a divorced father's need to win his son's affection is expertly twisted as he finally gives in and lets the kid go onto the titular vehicle, and, well, what do you expect from the free ice cream rides around the block? The strong point is the sticky sweetness of ice cream as a bland mask for unspeakable desires, from the moms purring after the handsome ice cream man, to the unforgettable glimpse of mounds of ice cream inside the bus, children crawling and licking away on them. The denouement, sadly, falls flat and silly - a less literal, less fantastic final horror would have worked better.

Another chilling story with an unsatisfying ending is House of Puppets. Here we consider how people may choose to live as puppets - exerting no energy, their limbs responding to the impulses of puppeteers living in the upper story, freed from the difficulty of life. There are shades of Erich Fromm's "escape from freedom" here, but also of the more sinister tones of Thomas Ligotti's existential horror. Not  coincidentally does Ligotti also make use of puppets and dolls as he opens up the nihilistic possibilities of denying and rejecting the self. 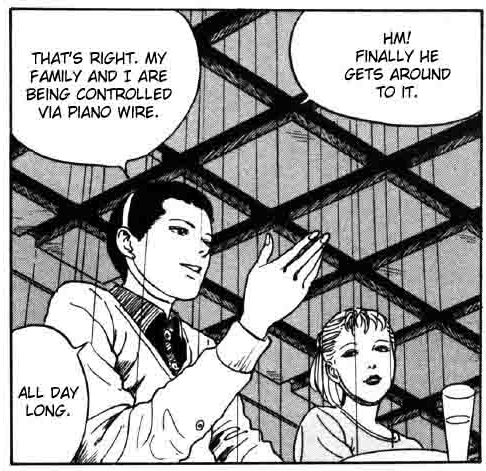 Ito's supernatural, trite turn betrays the real possibilities of the setting. Psychology experiments, from Milgram's Cyranoids to Wegner's less well known explorations of the merely perceptual nature of agency, leave it a real possibility that the sensation of self in ourselves is an illusion; that things we think we have done are the work of unconscious automatisms. Now imagine the surrender of something as precious as the self as an ambiguous horror, pulsing also with relief.

Fantasy gives us such a possibility through magic, so that a critical failure to save against a charm effect might indicate a Stockholm syndrome- a newly acquired flunky whose lack of initiative is as disturbing and counterproductive as it is useful.

Or for a more perverse act of gamemastering, offer a Faustian bargain; through sorcery, the control of a player's character to be transferred to an altogether more competent agency, unearthing powers and possibilities, earning experience at a double clip while so possessed, seemingly (or in a shocker, actually) working for the good of the character and the party with inside knowledge and superior craft.