There is something not quite right about this argument against the design of an unattributed map of the Tolkien city, Osgiliath (the art, if you look it up, is by Dan Cruger but I'm not sure how much of the design is his). That something comes from the hidden assumptions when we - meaning people in the English-speaking world - talk about "fantasy" anything. 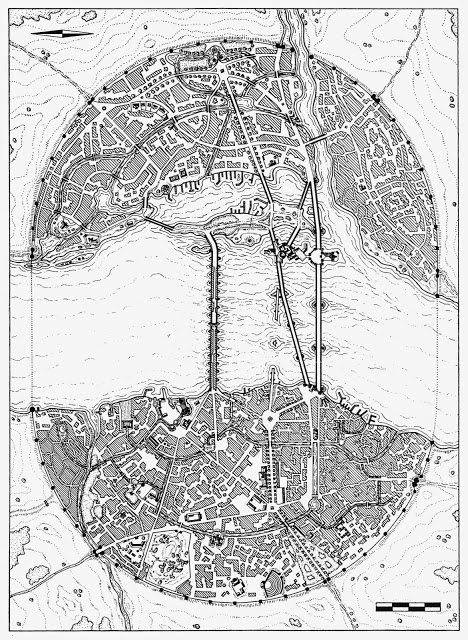 First of all, this isn't even true of the medieval world, where most urban dwellers by numbers lived in Chinese cities built on a grid system. All right, it isn't even true of medieval Europe, where the Mediterranean world had Roman city planning to build around -- although as this lecture points out, the original grid often got clogged and complicated for reasons very different from cows needing to find water. None of these reasons enter into Tolkien's world.

And if you look carefully at Tolkien's Europe-by-analogy, Gondor is the successor state to Numenor's Rome-cum-Atlantis. Osgiliath, too, was a purpose-built capital founded by scions of an advanced civilization. In other words, there is every reason for it to look more like Rome, Washington DC, or Brasilia than London.

The city, in fiction, endured for a thousand years without any of the economic burgeoning or social decay in Tolkien's world that the real European Middle Ages experienced. Again, you can bust Tolkien's world for its assumption that vital goods are dutifully brought by silent farmers to the real scene of the action, where kings and knights rule steadily and wisely unless interrupted by Sauron's evil meddling. But Osgiliath's design in that Middle Earth Roleplaying product, its rational avenues and small size, fits perfectly with those assumptions in Tolkien's very low population density world.

The military critique is another thing, and you can surely see how Osgiliath fell --five hundred orcs in canoes floating downstream would be enough to cause serious havoc. Consider, however, that the place was founded as a refuge on a seemingly peaceful continent, and there might be room for the kind of planning hubris that plagues purpose-built capital cities ("But you must live on both banks of the river so I can build the BIGGEST BRIDGE THERE IS!")