One Page Contest Entry: Gripped in the Hands of Time

I had doubts, this year. Didn't think I was going to do the One Page Dungeon Contest. I had some vague idea about a dungeon with a time travel gimmick, but nothing definite. Besides, all my game design time was going to writing rooms in volume II of my megadungeon. Getting nigh on 50 of them. 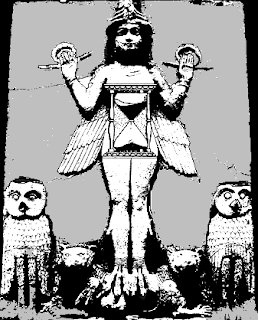 Then I came to the part in my map where I had a little suite of 4 rooms, earmarked for something secluded and weird. I cast some randomness on it and one feature - a clock - came up. And I started getting ideas. And pretty soon I realized those ideas would fit on one page, too...

The title describes each of the four rooms in a different way, but it was only an afterthought.My initial impulse was to fill in the blanks in the classic roleplaying madlib: _____ of the ______ ______. Then I saw an adventure that broke that trend and the title came to me.

It's conceived as a module, an abandoned hideout that can be dropped into any setting. The fight is probably going to need high levels and the puzzles are definitely going to need sharp minds. What I like is the way the different elements can interact in an emergent way without having to write it all out with "if-then" prolixity. The diary tells of the time sacrifices which gives you a clue what to do at the bas-relief. Bari-ritu's gifts can help you with the clock lock if you are stuck in there.

The Latin, as translated: "YOU CAN NOT HAVE A MEANINGFUL CAMPAIGN IF STRICT TIME RECORDS ARE NOT KEPT."

Bari-Ritu is played by the Burney Relief.