Session Report: Storage Cellars of the Castle Ruins 2B 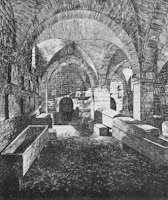 Fortified by chili and roasted peaches with mascarpone - a toast to the cook! -  our intrepid party slipped once more into character, upgrading equipment with their spoils in town.

Party rich kid Ekhdrine the fighter spent 10 coins for xp on the carousing rule, and a roll of 6 on d6 led to a "good thing" - one of the drinking buddies in town turned out to be Luke's dwarven berserker from the first run, who gave a few reminiscences about the first expedition that could have been useful ... if they'd been followed up on with more questions.

They also had interrogated Zektrah, a captive from the big fight last time, who gave them the low-down on the dungeon's power politics, and was then released to run home.

Whether this will be exploited remains to be seen, as this evening's session had little to do with humanoids apart from a couple of fights that left the foes dead and the party little the wiser about what was going on. Instead of heading back to the area of the battle last time, following up the leads from the captive, the party went down some nearer byways. They found a trio of stairs down, which were tempting but eventually avoided; another way back up to the surface; a couple of rooms, one inhabited, one empty; and finally, a fight with certain monsters from Varlets & Vermin outside a peculiar underground tavern door. Sadly, the battle left the lizardman-victimized hireling, Morson, dead. As the session concluded, from a fumble-broken window of the tavern came a strangely out-of-place flute melody!

I wrote this level to give a sense of exploration, hoping to create the intrinsic satisfaction of piecing together clues and history that I'd noticed in my time playing text adventure games. And even though there was little grand drama or epic combat this session, the details kept coming up ... the recurrence of purple and black heraldry, and the discovery of the seal of the Archmage on a wine bottle ... the humanoid graffiti room that spilled a little more about the competing tribes ... the torn corner of a map in the stairs room, could it be a key to the levels ..?

The tavern should be fun if they go inside.
Posted by Roger G-S at 05:01

Email ThisBlogThis!Share to TwitterShare to FacebookShare to Pinterest
Labels: castle of the mad archmage, play report