I played this for the first time the other night as part of our local pub boardgames night, taking the part of a dwarf in a full party through the first two scenarios. Pretty neat, very simple dungeon crawling missions from 1989 Milton Bradley with help from Games Workshop - the involvement of the hardcore hobby gaming pros definitely shows. 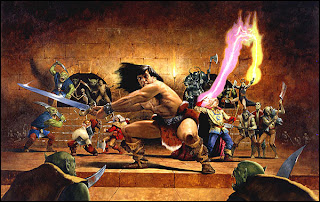 I think when it was released I ignored it pretty much as a "kids' game," and it certainly is that, but it teaches fun lessons. Initiative is achieved by running right at things and whacking them. The dungeon furniture is cool, though disappointingly generic in game effects. The miniatures are really well sculpted and could form a starter set for a beginning DM in a more serious game. Although the game is cooperative in theory (4 players against a game master), the lure of treasure is strong and there's room for some sharp elbows, blocking off doors to rich chambers, and the like. And eventually, in a streamlined way, the rules cover such complexities of dungeoneering as secret doors, traps, hidden treasure, wandering monsters, spells and saving throws. There's something to be said for a character sheet that only has 2 numbers on it ...

All the same, the replay value doesn't seem long on a game like this; a few more characters could have helped things out some, or some way for characters to advance beyond just accumulating more gear and loot. There were a whole bunch of expansions, too, and I suppose the basic game did its part of getting a generation of kids interested in pushing miniatures around a dungeon.

As Grognardia is talking about entry-level games, I think one plus of HeroQuest is its very tactile nature, coupled with simplicity (a lesson Fantasy Flight need to learn) and completeness of play out of the box. The need for miniatures and tactical displays certainly show that the core D&D brand has staked itself on the tactile experience as a point of sale against the computer game juggernaut.

Will that ultimately mean longer legs than the truly interactive, social and creative experience that's offered as a counterpoint to computer games by the old-school revival? Perhaps, but I know which one is more important in my games.
Posted by Roger G-S at 23:27