The De Wolfe production library has supplied royalty-free stock music to such illustrious shoestring auteurs as Terry Gilliam and George A. Romero. De Wolfe's memorable mall-music tune from the 1978 Dawn of the Dead, "The Gonk," had me wondering about the title, and sent me on a trip back to 1965. 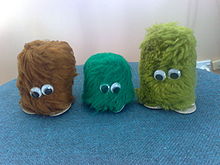 Gonks, apparently, were novelty doll-toys of a generally round shape with a fused head-body and assorted limbs. Almost forgotten now, they inspired an early British rock film ... 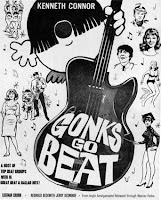 and, perhaps, one of my favorite monsters from the gonzo SPI mini-universe surrounding the Swords and Sorcery, Citadel of Blood and Deathmaze games: The Cronk.

This counter from Citadel of Blood shows a furry, two-footed, hassock-like creature with middling hit dice (1+1) and a decent attack value (4). (How these armless wonders can field archers, spearmen and cavalry in the Swords and Sorcery wargame is something I don't quite get ...)

The rules also tell you that "Cronks have a stench that may sicken a character." So, the troglodyte niche, but so very much cooler.

Cronks are foul, furry creatures that live in abandoned tunnels, dank swamps, and dark woods. Where prey is small, they exist in groups of two to five, but larger mobs are known to assemble where large creatures can be brought down. They have a malicious intelligence that cannot be put to full use because they lack hands. Nevertheless, their fanged bite is a nasty weapon. Also, they have a stench that may sicken others; any character who comes within a 10' radius of a cronk for the first time that day must save (Poison/ Fortitude/ Body/ CON) or be incapacitated retching for one combat round, and -2 to hit for 3 rounds after that.

This jolly character from Citadel of Blood was "Raman Cronkevitch" ...a demi-cronk. Yeah, why don't you let that one sink in for a while.
Posted by Roger G-S at 12:30