And now, some more house rules from my slowly-accumulating 52 Pages.

The rules for missile combat have evolved since the days of the Assayer's Guild; I'm particularly satisfied with rolling to miss intervening figures and carrying through after a miss. 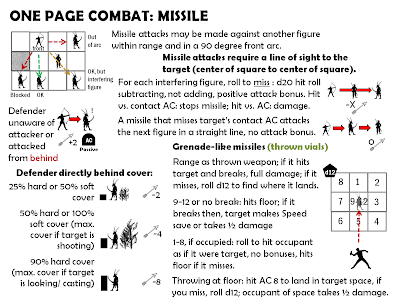 The grenade-like missile rules link up with the breakage rules to make flaming oil and the like much harder to use than is typically allowed for in the Molotov hobo tradition of Advanced and Basic D&D play. I'm in the Delta camp that way, but even more harsh when it comes to realistic breakage. Will a bottle of wine really shatter when it's thrown against a furry owlbear or unarmored wizard? If the flask you're using is that fragile, it will also need to check for breakage constantly; if you so much as fall down in melee, or bump against a wall.

The direct-hit burning grenade is a fantasy, even if you allow (as I do) a higher-octane, expensive, volatile alchemical "greek fire" to be bought. Far more likely is that it hits the target, drops to the ground, maybe breaks there, and then gets lit by the wick. Far more foolproof is the use of burning oil actually allowed for in OD&D, to create an instant barrier deterring pursuit. In some ways, too, it's more "old school" to run from fearsome foes than to flambe them.