Spoilers, of course, are ahead.

I never really understood the point of the Sussurus monster from its description in the ol' Fiend Folio. A big headless ape made of honeycombed bone channels? Wind blows through it and makes a sound that sleeps the undead? Only after opening Albie Fiore's White Dwarf module The Lichway, from 1978, do we see this critter in its original context. Yes, it makes perfect sense as the linchpin of a puzzle-trick set up to confound murderhobo play. If you kill it or drive it away, the colossal undead army it was keeping asleep wakes up and comes after your weedy 1st level party.

There's a clear debt the James Raggi module Death Frost Doom owes to this module. In DFD, the undead-sleeping monster is a plant that has to be hacked down to get to a treasure, its sound described with the word "susurrus." Fighting Fantasist calls this more than coincidence and cries foul; another review gives DFD a pass. I think it's no coincidence, but it is possible that Raggi's starting point here was the monster from the Fiend Folio, a source more available to someone who grew up in the US than old White Dwarf issues. Although it is odd that of all the undead critters it could be keeping asleep - up to and including an actual lich - the "undead army" happens to get picked. It's also peculiar that we expect attribution for adventure ideas but not monster variants, but there it is.

Anyway, I also agree with Fighting Fantasist that the original trick is more fair to the players. Yes, DFD famously delivers "doom," but the point of horror or any other foreign genre in an adventure game is to provide a setting that can be won through by cooperation and wit, not to "doom" the party. The Lichway gives a clue in the form of a rhyme and a couple of sample undead that are lying on the ground sleeping, and gives more options in interacting with the caged-up critter.

Structurally, The Lichway offers a single path of least resistance on the way to the susurrus, who sits atop a big hidden treasure. Following the ever-louder sound, through a couple of easily opened doorways, leads you right there. There are also side paths that pass through secret doors and a flooded area, leading ultimately to the secondary path of the dungeon, occupied primarily by the renegade magic-user Dark Odo and her minions. In terms of my previous article, this is an almost-railroad that gives the possibility of alternate paths, Jaquays-style. But in practice, to reach the susurrus any other way is hard. 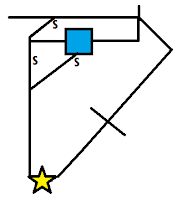 The most likely scenario, then, is that the party proceeds down the right-hand path, screws up at the climax and has to run from the skeletal multitude that appears along their previous path, and so flees back through the left-hand passage, encountering Dark Odo along the way. Because of the clueing and design, though, it doesn't feel like a railroad in play, and this kind of illusionism is perfect for a limited-run adventure - or as the title describes it, a "mini-dungeon."

Next: Hacking, fudging and running the Lichway, and the value of "diorama-style" descriptions.
Posted by Roger G-S at 12:16