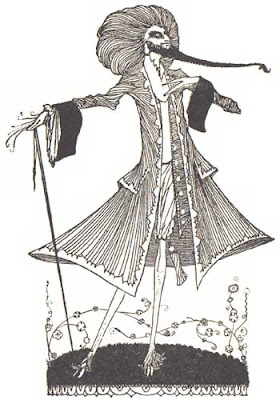 I feel impelled to contribute to Cavegirl's Harry Clarke Project using this fabulous fellow (Bluebeard?) who has sat on my hard drive many a year awaiting his introduction to polite society.

The parentage of this sterile nonesuch is cruel and improbable: a male-aspected devil of Hell's nobility and an elf-maid of the fey planes. Invariably male, but questionably masculine, hellrakes flaunt the improbable, reedy physique of a clotheshorse, with one or two coy devilish marks such as hooves, horns, wings, tail, talking moles, goatish features, or ruddy skin. Their anatomy only partly explains the bizarre, stiff- or bent-legged gaits they affect when making a grand entrance, for they can run fast enough if they need to.

Hellrakes are notorious, thanks to the legendary Barbramel, as fashion-breakers and fashion-setters. Other of their recorded professions include gambler, verbal duellist, procurer of succubi and incubi, black-market sommelier of potions and philtres, hired mourner, slander poet, and erotic ballet impresario. Each one will usually have the abilities of two character classes at 6th level or one at 9th: fighter, thief and wizard are the favored ones, but they are drawn to more exotic choices if available, such as assassin, illusionist, or bard. They take half damage from spells, no damage from normal weapons of iron or steel, and double damage from silver.

The nature of the breed is whimsical, ostentatious, and vain, their quirks but a masquerade upon a thoroughly rotten core. In front of those who matter, they make a great show of bravery, but when fending for themselves, they are craven. Despite or because of these flaws, they are usually attended by an entourage of 1d4 sycophants, grifters, opportunists, and pleasure-seekers from this list (d12):

The hellrake ilk is inveighed against in a famous theatrical soliloquy of the Autumn Court literata Glingeroyce, thusly: "thou Limbeaux, thou Cocytuscombs, thou Hellsapopinjays, thou Macaro-Nicks; toffs of Tophet, preening pimps of perdition, flouncing fribble-fiends, sad cads of dire sire and glam dam."
Posted by Roger G-S at 10:06