Some scholars have argued that bodily deformities, asymmetries, and mutilations arouse disgust because they are cues to disease. They point to studies showing that seeing any kind of deformity makes the concept of disease more accessible and available, as measured by psychological tasks similar to free-association. This is true even of deformities that science tells us have no relation to contagious infection, such as birth defects or missing limbs. The idea is that our cultural/biological immune system thinks we're better safe than sorry, loading us with a tendency to get disgusted about any sort of strangeness of body.

That may be so, originally. But disgust serves another purpose than just protecting us from disease. It's a response protecting our fragile self-awareness from existential strangeness, from things that blur the human category, and from people who violate the cultural practices that are required to set us apart from the animals. One such practice was the blackening of teeth by the aristocracy of Heian-era Japan. By the strict biological interpretation of disgust, rotten or missing teeth are a cue to disease. But Lady Murakami, in her diary, wrote of the revulsion felt at seeing the white teeth of a commoner, which were like those of an animal.

Fantasy literature and gaming abound in animal-humans and other monstrous beings that cross the boundary between people and other. Disgust is one reaction to such creatures. 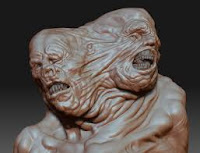 Some monsters are more likely than others to be disgusting: crossbreeds with disgusting animals, like fish, pigs or octopi; creatures with key aspects of humanity altered or missing, like bones or a face. Some mutants are fairly normal in fantasy, mainly because they are crosses between humans and domestic or noble animals that we semi-humanize anyway (centaurs, satyrs). They take on a disgusting aspect only when we think of the possibility that they were created through human-animal sex, as the mythical Minotaur was. Regulating our sexual possibilities, of course, is another way society makes our bodies human rather than animal. In most societies, even the most liberal, disgust at monstrous, unnatural or indiscriminate couplings is a mainstay of social order.

Disgust is not just a marker of the nonhuman, but an active route to dehumanization and extermination. Pig-face orcs bring with them a mandate to be killed in a way that pigs or humans do not. Their very existence offends the natural order, they mingle Platonic forms in a way that must be exterminated, though we cannot articulate why. We still have primitive reflexes, conditioned by fiction and the way we talk about the world, that draw an equivalence between what's natural (actually, what fits into our human idea of nature) and what's moral. Picture the following exchange in fantasy land:

"I've found the source of those strange monkey-slug-polyp things. They come from a vast, bubbling pool of slime in the swamp, surmounted by a swaying, tentacled pillar of flesh."
"How amazing! Let's go there to observe and celebrate the diversity of life in this magical world!"

Unlike fantasyland, reality presents us with no such physical cues to evil. People who present a monstrous aspect usually got that way through no fault of their own. This leads to a second, more liberating impulse in fictional treatments, itself by now also a cliche - the sympathetic, misunderstood, even heroic monster, from Beauty's Beast to the Elephant Man to the Swamp Thing.

Weird or heroic fantasy follows the first two patterns, where the monstrous is to be exterminated as a reflex. Science fiction, though, often follows the sympathetic pattern. Think of Gamma World's scheme where everyone's a mutant, or the typical galactic romance with its teeming variety of aliens. In the words of SF author Jeff Noon: "Pure is poor."

So we get one more insight into the much-discussed flumph: as a good-aligned creature, its monstrous aspect (those tentacles, that mouth) is anathema to the conservative physical-moral equations of fantasy, but fits right at home in science fiction.
Posted by Roger G-S at 09:16