Having now read the Dungeon Crawl Classics beta document, and observed the whirlstorm and piñata party of posting around it, I find that most things I want to say about it have already been said.

Also, I especially enjoyed the line drawings by Peter Mullen. They are like Sidney Sime's material as drawn by Tove Jansson, in other words, double weird fantastic.

But I want to focus in on one specific reaction I had (and Mr. Rients, too, in his scrawlings). I really liked the idea that fighters had a special power that they could use with some of their attack rolls, to do improvised maneuvers like knock an enemy back. The "Mighty Feats of Arms" in the player's section are great, and presented in the right amount of detail.

Then you get to the judge's section. And each MFoA is presented in excruciating detail, with a paragraph detailing the exact result in game terms for each level of success rolled.

Once you have written a rule you cannot unwrite it. It doesn't matter if you have encouraged the judge and players to "be creative, hey presto old school." The space for that creativity has to be kept open by not making any kind of official rule. Otherwise, whatever you improvise might be seen, on a later perusal, to be "wrong" or lacking.

In other words, if this was my reaction to the Mighty Feats rule for the players: 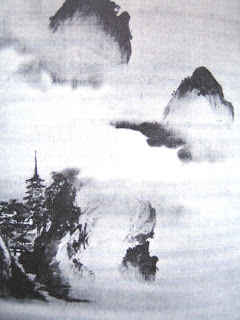 the judge section did this: 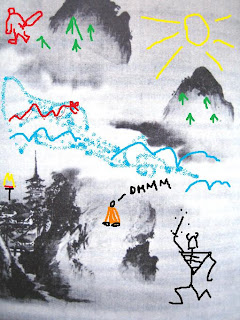 This betrays a fundamental uncertainty about audience. Are you writing for the kind of confident judge and players who feel good about improvising? Are you writing for the less than confident judge and players who need rules guidance at every step? Or are you writing  to help the second group make the transition to playing as the first group? DCC (and not just on this issue) seems to preach for the first group but practice for the second. I'll also note that there's precious little material out there that tries for the third goal.

By the way, if you want to implement "Mighty feats" in a more standard D&D-style game without rolling an extra die, a quick solution might be to roll the fighter's weapon damage die whether or not the hit succeeds, and have a feat-style effect happen on a natural 1 or 2. This advantages the dagger and other low-damage weapons, but also gives somewhat of a consolation prize for missing in combat.
Posted by Roger G-S at 07:56