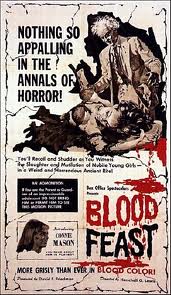 There seems to be a trigger of disgust with a biological function that goes beyond protecting us against infection. Known picturesquely as "violations of the body envelope," and more prosaically as "blood and gore," such revolting things include blood, viscera and other signs of injury. Far from being infectious, these things instead are in danger of being infected, if the person is still alive, so it kind of makes sense to keep your distance from them, which the disgust emotion encourages. Extreme forms of gore disgust have been implicated in blood and injection phobias.

Researchers have found one interesting biological marker of gore disgust that's different from others; when most people react to blood and injuries, the heart rate goes down, rather than up as it does when seeing infectious or immoral things. This makes some sense as an automatic reaction to blood that could be your own; if that's true, you need to stop pumping it out so quickly.

Blood and gore is also fear- and anxiety-provoking. It reminds us of our bodies' mortality and tells us that right here and now, we could be next. This blend of disgust and the fear emotions has been identified as horror. Although research is lacking on this topic, I believe that many people see the ability to feel horror as a marker of moral standing, a guarantee that the person will not resort to violence because of revulsion at its consequences.

Certainly, lots of parents are OK with their children killing hundreds of people or creatures in a video game, as long as there's no blood or gore. It's hard to convince someone by reason not to be disgusted, but one of the better ways is to repeatedly expose them to the disgusting stuff until they get used to it. The concern aroused by gore in games and earlier media, such as comic books, is that children will become hardened to the disgusting signs of violence, and become more violent as a result.

Is this concern justified? I'm not so sure. One group of people that needs to get used to blood and gore is doctors, nurses and EMTs, but this lets them help people more effectively. I do believe that many people have an effective, emotional brake on committing violence, but this doesn't respond to the aftermath of violence; that would be too late. Rather, it responds to the act of physically harming another person.

Army psychiatrist David Grossman made this case in the book On Killing, gathering historical and clinical evidence that many soldiers actually avoid directly harming the enemy - an aversion eliminated in US ground forces since Vietnam through human-target conditioning. His concern, which made the media around the time of the Columbine massacre, was that first-person shooter games were doing the same job on the youth of America. More solid experimental work in recent years has pinpointed an emotional reaction in the brain that makes people reluctant to end one human life even to save five others. This reaction is strongest if the scenario forces the person to actually apply personal energy to the killing, as opposed to pushing a button. Both these lines of research identify the key aversion as happening before the violence, not afterwards when gore is strewn around.

One of the few RPG systems that acknowledges this is Lamentations of the Flame Princess, with its portrait of the fighter class as someone who has become accustomed to violence, and as such can uniquely deal it out most effectively. Indeed, part of military training from Roman times on has involved not just teaching soldiers how to strike accurately, but how to overcome their aversion to doing so. Rather than indulging in blood-soaked wish-fulfillment, a mature approach to combat in games will acknowledge this unpleasant moral fact in one way or another.

Getting back to the topic of evoking emotions in a game, signs of death and gore should evoke horror in your players, but more on the fear side than the disgust side. They're a time-honored way to signal that Something Nasty is about ... the encounter may not be level-appropriate ... your characters may want to consider turning tail and running. In any event, apart from the odd grindhouse edition, gore in tabletop games remains enacted in the theater of the imagination, of little moral danger to anyone.

Why, then, the moral concern about the gruesome and macabre? All will be revealed - when I conclude the disgust series with a look at the moral uses of repugnance.
Posted by Roger G-S at 00:54