Ladies and gentlemen ... Green slime has a theme song.


In this technicolor B-movie from 1968, there's apparent inspiration for not one, not two, but three old-school gaming classics.

Of course, the green slime.

But then, the slime creatures ... with their one eye and tentacles ... kind of resemble Ropers.


And finally, the plot of the film ... one-eyed green aliens grow from larval form in a station, are blasted with energy weapons which only make them grow and multiply, and eventually overrun the whole place ... is a very likely inspiration for the classic Tom Wham game from TSR (and later Steve Jackson), The Awful Green Things From Outer Space. 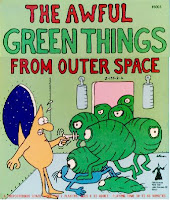 And the director? The underappreciated Kinji Fukusaku, better known for Battles Without Honor or Humanity, Tora! Tora! Tora! and Battle Royale.
Posted by Roger G-S at 18:00