The next step down from the district, in our coin-based city system, is the "street" - well, really, a 200 foot wide area that may contain one notable street and a number of side passages and alleys. The world of narrow streets is traversed by wider thoroughfares that connect the districts. One Page Streets lets you generate all of this with a handful of change (and you don't have to have 21 coins ... just recycle the ones that turn tails up). 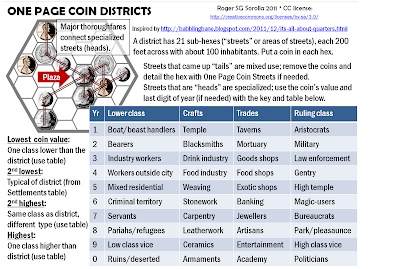 This system also works for creating a full-sized town of 2000, or of fewer people with fewer hexes, as long as you use the district system to give it an overall character and main industry.


As an example, let's continue the small city we were creating last time and flesh out its central district, dominated by local traders. This is the example illustration on the sheet, but what do all these coins and their dates really mean?

There are two main concentrations of traders (heads-up nickels); the dimes represent associated respectable trades, an academy area, burying ground and jewellers, while to the edges of the area some industries have become established. The quarters heads-up indicate that some higher-class streets are part of this area: the plaza is a fashionable promenade for the nearby gentry, country landowners who compete with each other to build the most impressive mansion and do a healthy business with the jewellers. And that cabal of wizards so close to the burying grounds ... it's no wonder the more knowledgeable are taking their dead to secure plots outside the city walls.

One advantage of this system is that it can be used on the fly. A few coins will give you the overall layout of the city, and as the party enters each district, a few more coins will show you what's artound the corner. Of course, sometimes they just want to know, "which way to the nearest tavern/pawnbroker/dog kennel", and the next page - for houses within streets - can help with that, too.
Posted by Roger G-S at 13:00