I never have been happy with the d6 surprise roll. I found its interaction with various incarnations of spotting, hearing and stealth skills unclear. So when last I posted on this topic, I stood by my preference to work out these situation in an analog rather than digital way - that is, to take the facts of the situation and determine who becomes aware of whom and when, rather than roll a die for a numeric result.

Well, for the rules I'm currently playing by that has worked fine, but I suspected there would be a fairly easy digital way to treat alertness and disturbance as playing against each other, while at the same time bringing party  and enemy alertness under the same system. The key is to realize that in spite of all their disadvantages in an adventuring environment - light, noise, unfamiliarity - intruders have one definite advantage, which is that they are very aware as they advance into new surroundings.

Picture an ogre's lair in the dungeon. I mean, what does he do all night when he's not hunting? He's used to the setting, he's intimidated or made peace with the surrounding monsters. He's not going to be sitting on a stool staring into the corridor for hours on end. 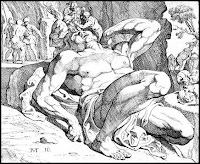 If the reaction tables and possibility of parley are one rule that serves to soften the blow of easy mortality in old-school settings, having an alertness table adds a further potential advantage for the party. What would you do if you came upon a sleeping giant? Would the surprise round be enough? Would you be smart enough to think up some Lilliputian tricks to press your advantage, as Odysseus did?

Then, the smart adventure designer will think about the giant. Perhaps he's aware of his vulnerability when he sleeps, and has a goblin or a watchdog as protection. The Homeric lesson about the Cyclops is that as solitary sociopaths, they are vulnerable to the efforts of men working together. Perhaps your setting's monsters have a similar flaw?

Anyway, here's the procedure. We can assume that normal monsters have a 1 in 6 chance to hear noise, move stealthily and  notice hidden people, going up for certain types such as bugbears. 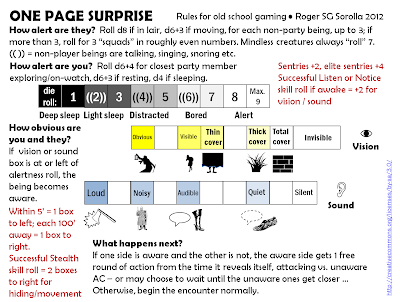