My wife is one of the players in my ongoing campaign and wanted to write this play report, to which I have added my GM-ly notes. This example also leads in to something I want to discuss next couple of posts, about how improvisation often leans toward the mediocre and what to do about it. I'll get there, strangely enough, by way of the advantages of flying and burrowing creatures in combat.

The second session in the new overland campaign found the Band of Iron trundling east from Wonderbridge.  The dwarven road continued along the rim of a deep river canyon stuffed with exotic flora and fauna.
Courtesy of Jim Pacek's Wilderness Alphabet. I stocked the 5 mile hexes two deep on either side of the road with a 1/12 chance of each one having an unusual feature. This misty canyon will be very interesting to descend into, if adventurers will it ... already a strange lizard-bird has been spotted and mighty bellowing heard from within.
No exploring, though - the Band had already signed on as guards for Orm's trade caravan out of Kaserolle, duty called, the wagons rolled on.

The caravan has been camping overnight, usually at handy farm villages. Next stop after Wonderbridge was Castle Gneissburg, home to a certain Lord Hugo and the ex-bandit men at arms gathered about him.  Former Kaserolle city guard and part-time dungeon chaperone Urbach decided to try his ever-unpredictable luck there, signing on as a member of Hugo's company.. but why did Urbach pay them money?...

A fairly logical ending place for this NPC's character arc. And who knows, there is always the crazy coincidence die to bring him back ...

Heavy rains swelled the River of Flattery along the caravan route, notorious for its magical reflective properties.  After unloading the caravan to cross a rickety bridge, the party investigated a basin at nearby Bonny Facholie village that collected the magical water. 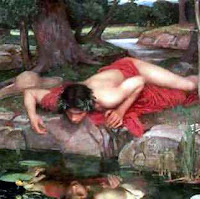 At this point the party had already received fair warning via a legend of a maiden already beautiful who looked at the waters of flattery and pined away Narcissus-fashion. The River of Flattery was a random Wilderness Alphabet feature - a  reflective river - but everything else was my own improvisation, If the river gave a flattering reflection, which was dangerous if the gazer was already good-looking, then ugly people would settle by choice near it, and handsome ones far away. The road went through the handsome people's village, and so they've set up a basin with water from the river as a tourist trap, charging admission to look within.

Shakira looked at his reflection  - and saw a handsome dwarf who could have been his brother.  However the reflection's expressions and movements did not match his own.

In fact, they were disgusted and contemptuous ... the reflection gazes also ...

The often self-effacing Sivir looked - miraculously, she didn't taste the water - and gained new and lasting confidence in her appearance.  (Permanent +1 Charisma, from 7 to 8)  Shea, quite handsome for a fellow who used to live on a mountainside with goats, looked as well - and had quite a different experience.  The compelling face he saw in the basin's water was bewitching, mesmerizing.. he was loath to admit it was not himself!  Slim drew forth a small mirror from her pack, showing it to the prophet in an attempt to strengthen his grasp on reality.  Alas, this aid backfired - Shea was horrified at the mirror's truth and could not shake the disturbed feeling.  (mirror granted 2nd saving throw which was a critical failure, permanent -1 Wisdom, fortunately no effects on his bonuses)

I don't feel too bad about this because there was fair warning about the effects of the gazing. All in all this was a new experience for the party, an outdoor implementation of a "dungeon trick" style encounter.

After passing a second castle flying the colors of Goran's Anvil, the party encountered panicked refugees from the nearby sheepfarming hamlet of Rosemary.   Horrified rambling about hypnosis, unnatural bleeding, sheep savaged by unseen forces from beneath the earth, a mad piper's eerie music luring the villagers on to their doom ensued - the Band had heard enough and charged to the rescue, promising to meet Orm's caravan at a village passed earlier.

A Wilderness Alphabet ruin, a village, and yes the table rolled "worms" as a form of corruption. This led me to prepare a whole mini-adventure, reinforcing the theme of artifacts made from purple worm teeth - the party is on the trail of a treasure map found in a scroll case made from one, the piper's flute is similarly made, and more clues may be forthcoming ...

The Band encountered a dazed, hypnotized villager, then crested the nearby hill to find the Piper and his music charming not only the villagers but a collection of unnaturally large worms, several burrowing through the fields, one massive specimen sloshing through a nearby bog.  The madman and his worms battled the party, who took him down in relatively short order, loosening his sorcerous grip on the beasts and rendering them nonhostile.

A combination of good tactics, circling around to get bowshots at the piper; the piper's own madness, sitting in the doorway of his hut when he should have taken cover; and a few other issues which I will discuss in the next post.

Then Sivir decided to "experiment" with the piper's exotic flute... Her far from melodious playing drew the immediate attention of all four worms, who renewed their attack.  The party felled the three smaller worms and tried unsuccessfully to lure the huge mottled swamp worm onto dry land.  The worm instead grasped the fallen body of the Piper (and its prized leather armor) and dragged it back into the bog.


Actually, a bloodworm, from the Fiend Folio. I used giant leech stats for the lesser worms.

Slim then tried to skulk into the bog in pursuit of the armor, provoking the mottled worm AGAIN.  The party was lucky (or blessed by Invictus?) as the worm was out of commission for two rounds in the resulting fight, one from a shrewd stunning blow dealt by the dwarf, another from its own confusion.  Courting disaster the Band was victorious once again, acquiring some worthy loot and leaving unanswered questions.  How could they shake the sorcerous hypnosis gripping the village of Rosemary?  What was the import of the Piper's strange items?  Could they make off with key bits of the mottled worm's remains?  What were those bits worth?  When would they meet up with Orm's caravan?  And most importantly, did Shea's dog Grigio still love him after the magic basin incident?

Of course he does, dogs are not that shallow. As an aside, we found email a good venue to do mopping-up and investigation interactions in between sessions.
Posted by Roger G-S at 21:39