The Thief As Aquaman 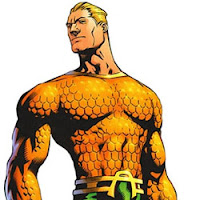 Poor Aquaman. Butt of a thousand comic-book meta-jokes because his powers depend on an aquatic setting. If he wants to join in the fun with the Justice League the writer had better provide a port, beach or boat.

You know who's like that in D&D? Yeah, the druid. But less obviously - the thief.

As written in the Basic and Advanced games, the thief is saddled with inferior combat everything, and gets in return some very unreliable skills (more on that next post). However, while combat is a feature of almost every environment, things like traps, locks, climbs, and sneaking opportunities have to be written into an adventure. Putting a trapped, locked chest on a high ledge is like putting a villain's lair in a undersea volcano for the Superfriends. If these opportunities don't make sense in the adventure, tough. Maybe this is one reason for the knee-jerk secret doors, traps, locks impulse I've noted in so much module writing.

In my 52 Pages system, and to some extent in 3rd edition, rogues work better because they have a clearer combat role as missile troops and sometimes scouts. The skills are useful, but secondary. I think any designer has to come to grips with this. "Can't do much but gains levels quickly" is not really a recipe for a viable character class.

There's a strange parallel here with the cleric. In Old School circles, as I've noted before, both these classes are marginal and often questioned. The cleric also presents a skill that is very useful in circumscribed situations - turning undead. This is the most direct tie to the class' origin as a vampire hunter, Van Helsing with the crucifix. Faith healing is less in line with the fiction, but in function, it's become the most important reason for the cleric to exist, to the point where 3rd Edition just laid down and admitted it, with free substitution of cure spells. The Aquaman power here, turning undead, is supplanted by a more generally useful combat power, healing.

By the way, that task I mentioned where the thief has to climb a ledge, pick a lock find a trap, and disarm it? In AD&D a 5th level human thief with 17 DEX has a roughly 7.5% chance of completing that skill sequence successfully. More on this next time.