Generic Fantasy As the Mundane

In Playing At the World, Jon Peterson classifies  many of the novels that inspired D&D as transportation narratives, where a guy (always a guy) from the present, real world is somehow taken to a fantastic land, where they have adventures and find our their true potential.  Three Hearts and Three Lions (which I recently re-read) the John Carter of Mars series, the Complete Enchanter series, all fit this bill.

The Lord of the Rings also kind of fits this bill indirectly. The hobbit heroes start from a place where folkways and technology are similar to 18th century rural England (showing how Tolkien represented "home"), and journey to a world inspired by Dark Ages sagas and medieval Crusader romances.

Eventually the brew of all the sources mentioned above and more gave rise to the "standard D&D fantasy" genre, which took on a life of its own. Somewhere, there is a tavern, with a bard singing, a tough barkeep (level 5 fighter at least), a dour dwarf, a haughty elf, an old one-armed guy with a map to sell, an uptight paladin and a thief worrying where his next Guild dues payment is coming from. By now this allegedly wondrous setting is so familiar that it's the venue of choice for new players, who already come pre-loaded with its assumptions from a diet since childhood of computer RPGs and generic fantasy fiction. 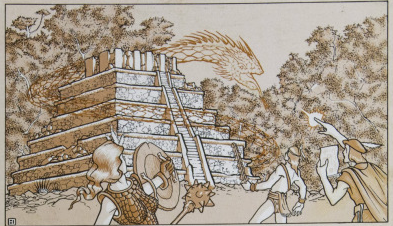 What's striking - or at least, true in my case - is that long-term campaigns themselves try to shake free at some point, with a transportation from this world of generic fantasy to a different one. This can be literal, in the case of Gary Gygax's dimensional portals beneath Castle Greyhawk, or figurative, as in the many high-level classic modules that involve ruins in the jungle or desert with a faux Egyptian or Mesoamerican flavor. Sending your dwarves and knights into a science fantasy adventure, too, is a classic move

Also remarkably, very few campaigns follow the opposite trajectory, starting out in an "exotic" setting and using the perspective of those characters to see Generic Fantasyland in a new light. The only fictional example I can think of is the book and film The Thirteenth Warrior, which proposes to demystify the Beowulf myth and Norsemen in general by having a character from civilized Arabia play the fish-out-of-water. The equivalent, maybe, is to have Empire of the Petal Throne characters wind up in Greyhawk.

Perhaps the weirdest move, and one rarely tried, is to send your fantasyland characters into the actual, historical Middle Ages - where your nonhumans are circus freaks, your wizardry and religion gets you burnt at the stake, you can be hanged as vagrants on manorial lands (that is, in 95% of civilization), and jolly taverns with busty wenches are few and far between. As masters or players of the game, there's a grand irony in being more comfortable with the endlessly repeated, Tolkien-meets Renfaire fiction than the gritty, rats-and-fleas reality.
Posted by Roger G-S at 00:05