A while ago there was some talk in various places about social rules for D&D. I don't use a specific set of social interaction rules beyond reaction and morale rolls for NPCs in various situations, but I did get thinking about what I do when GMing a social interaction, what other people might need to get to that level, and what I need to do to get beyond that level. 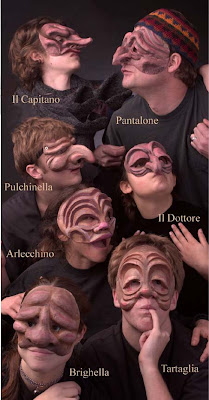 Usually, I have some idea of the character in my head. This is often based on a stock fantasy cliche with one or more wrinkles. For example, there's an NPC ranger in my campaign, Burnsteen, who is stoic, no-nonsense, and was introduced to the players more or less as the hand-me-down brooding Aragorn figure in the hooded cloak at the corner table. His role is as liaison to the town (one point of individuality) but pretty much he follows the picture on the can. Oh, except for one thing - he ... wait, my players are reading. Never mind.

Anyway, a GM who isn't as thoroughly basted in all the classic Modern Medieval Fantasy genre reading and ideas might have trouble coming up with these cliches. Even for the rest of us it might be good to have a reminder of what a dead-center personality would look like for a standard barmaid, sailor or dwarf.

Where I sometimes need help, especially when improvising, is veering off center. If you do it intentionally the results can feel forced ("The ranger is, um, an opera singer") and there has to be a balance where not every character intentionally breaks cliche. This is where a random table would come in real handy, giving plausible deniability for your evil decision to make the town gate guard turn out to be an egomaniac tyrant.

So on the right, or through the link, you may download a pdf of my Dramatic Personae. This is a d6-based table of 36 stock fantasy characters - the wizard, the knight, the peasant, the barbarian, etc. - each with five cliched motives or character traits. There's a random method of generating non-player character traits using this table, and some ideas for how sub-types might fit in. You can see this, perhaps, as a supplement for social interaction with the kind of stock characters that Al, of Beyond the Black Gate, gave combat stats for in the Monsterless Manual.

The method leads to some characters being completely as expected, varying only in how nasty or nice they are. But, some results also lead to Distinctive traits. That is, the character gets someone else's cliche. This can lead to a boisterous wizard, a barbarian who fears death, or a floozy with a heart of lead.

All else is explained in the document. Enjoy!
Posted by Roger G-S at 23:29