Politics, shopping, carousing? Not tonight. Back to the dungeon for another helping of kobold slaying!

I was ready for them. The current kobold-infested level of the megadungeon, a home-made first level that sits on top of the Castle of the Mad Archmage lower levels, is now a huge PowerPoint slide on my laptop. Crude unit squares marked the disposition of the two tribes that were going to war, the Yurog and Am'rash. Topside, the party's contact in the Yurog, the Common-speaking Yonx, informed them that the Am'rash had pulled some levers and sealed off the usual entry ramp. He led them down an unfamiliar ramp to where a small unit of Yurog was waiting, and a few messengers sent off into the dark brought more.

The Yurog were tightly organized and disciplined into units of six; two slingers, two shield-and-club warriors, and two long spear carriers, who moved back and forth into formations with practiced ease. At the sound of far-off shouting and clanging Yonx gave the sign to move forward, south ...

The enemy Am'rash were organized around a crude barricade-like bastion, two and a half feet high and some 10 by 20 feet, guarding the double doors that led further in. Four hobgoblin soldiers had inexplicably joined their ranks. The troops in the bastion were mainly male and female kobold pairs, each teamed up to handle a scavenged halberd. A couple of sling-wielding scouts completed the layout. The leader (red M) was waiting behind the doors. 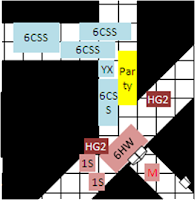 At the approach of torchlight and clanking metal, the scouts wounded one Yurog slinger and faded back ; the hobgoblins arranged themselves for a side attack and the defenders of the bastion thrust halberds over it. Meanwhile the Am'rash leader, alerted, was opening the doors and preparing his troops.

After a couple of rounds flesh-wounding the hobgoblins, losing a kobold, but seeing Yurog morale hold, the party decided to unleash the bane of all kobolds. A Sleep spell fell right in the middle of the bastion where, unseen, the leader had moved up. Seeing the leader and four of the troops fall senseless, the rest of the Am'rash fled and the Yurog, shouting, surged forward into the bastion.

Hard to climb a neck-high wall for a kobold; but in a practiced maneuver, two shieldbearers crouched, put shields on backs, and the others mounted up and over them. The Yurog, with coordinated sling shooting and second-rank spear jabs, finally dispatched two hobgoblins. The party members surrounded and quickly dealt with the remaining ones. Into the lair, cutting throats as you go! Watch out for those falling rock traps ... there go another two friendlies. 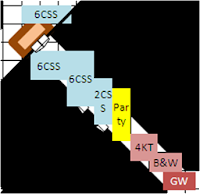 A long diagonal corridor was the scene of the last combat in the evening's short-ish session. Some remnants of troops confronted the onrushing Yurog and surface-siders; four kobolds in a somewhat impractical tortoise formation with iron shields and long spears; the "Best and Worst," a very well equipped 4HP kobold and a very poorly equipped 1HP one; and the ace in the hole, a ravenous, blood-sucking giant weasel!

The enemy kobolds fell as kobolds do, with really bad dice rolling on their part. The weasel ripped into the dwarf's flesh, latching on with a high roll, and would have surely drained blood and imperiled her life on the next round had it not been for a lucky critical hit with a kobold slingstone against the weasel's head, which made it release its grip. Blow after blow landed on the weasel, but landed ineffectively, the beast living a charmed life and killing one kobold, finally succumbing to the law of large numbers.

Just then (again, off-scene dice rolling favored the party, delaying this event for quite a long time), more kobold cries echoed from outside the double doors. But the war will have to wait until another time ...
Posted by Roger G-S at 00:28