Mithril Steel In The Hour of Chaos

As much as I can understand the moral counter-panic about the "no D&D in prison" story, and the stupidity of the reasons actually advanced in the court case... 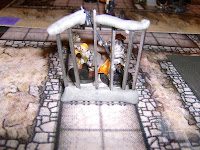 How can I say this? It just doesn't look good to have convicted felons playing a game where they cooperate on strategies to break into lairs, past locks and security systems, carrying off anything that isn't nailed down and killing anyone who tries to stop them.

The funny side of this irony was well worked out in the Knights of the Dinner table comic book. One of the gamers, Crutch, is an ex-con trying to go straight. In one of his less successful tries at this, he let a shadier friend egg him on, and talked one of his tablemates into unwittingly devising a plan for a real-life burglary,  presenting it as an adventure scenario in another game he was playing in.
Posted by Roger G-S at 13:50