The Light Fantastic ... and Eight Other Fantasy Esthetics

Recently I was debating over whether or not to emphasize mundane abilities for wizards, finally making the call against. Then a number of other things blipped across my mental radar. Doing research on the history of D&D encumbrance rules, I flicked open the 2nd Edition Players' handbook for the first time in ages, marvelling at the mundane exactitude of its encumbrance rules and equipment lists. Zak had a long evisceration of a 4th Ed. module with special attention to the muddy art style. Then back to 2nd edition, trying to figure out what exactly galled me about the majority of the art pieces, and why that gall coalesced around the Elmore frontispiece ...

Okay, one thing is that it's prosaic. There's actually some sly humor here if you look at it right. The adventurers are cast as a modern-day group of deer hunters or marlin fishers posing with their big prize. They've strung the dragon up - why, exactly? Who's taking the photo? It's a witty anachronism, but one that drags us away from the fantastic nature of dragons, into the realm of weekend warriors and twelve-point bucks.

The other thing that didn't match my gaming esthetic was the lightness of the piece. Not in terms of humor - humor can be dark, too. Rather, what I mean these are clearly a bunch of characters, blessed with 4d6-drop-lowest stats and maximum hit points at creation, who have just ganked what can only be a hatchling green dragon*. For this mighty feat the DM has seen fit to award a shoebox-sized treasure hoard. This piece conveys the exact opposite of "dangerous." The exact opposite of squaring off against a 30 foot high efreeti. The only sign that the party has faced danger are three little claw marks on the trouser leg of the hulking chainmailed fighter.

Call one axis, then, "light/dark". It's defined by danger - in a game system's mechanics and in the game's art. But what's the other axis? Going back to the first gripe, it's the fantastic versus prosaic. This is a hard distinction to define, especially in a genre where everything technically counts as fantastic. Let me throw out some examples that do it for me. In a prosaic fantasy world:

The full esthetic alignment grid appears below; with "Tough" being in between light and dark (an environment that is difficult and dangerous, but ultimately surmountable through sheer force of will) and "Worlds Collide" being a commonly seen situation where prosaic characters are thrust into a fantastic universe. On it I've distributed a number of game systems and settings according to my overall sense of where they fall. 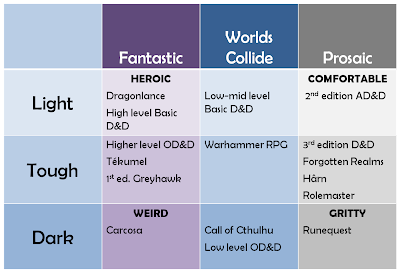 A couple of observations from this:

1. It's easy now to see why 2nd edition D&D was the way it was. TSR's mass-marketing of D&D, especially the kiddie market, required a diagonal flight from the Weird; a renunciation of the devils (and demons) and all their works. First to go were the BIG RED DEVILS on the core rulebook covers, then the comfy esthetic of 2nd edition followed suit in a big way. An important thing to realize is they didn't actually succeed in making D&D more attractive to kids, who always have reveled in stories, films, and comics full of blood, gore and evil. But they made it more attractive to parents. This is why I liked 2nd edition AD&D when it came out in my early twenties. I was trying hard to be a Grown-Up; the Light Prosaic, with its sober rules and materialistic detail, fit the bill.

2. I can't for the life of me fit 4th edition in here. There may be some kind of disconnection between its visual esthetics and its actual gameplay, though.

3. My current game is in the "Tough/Worlds Collide" sector, edging to Dark. What's your favored mode?


* Yeah, I know, a hatchling green dragon by the Monstrous Compendium has 7 Hit Dice despite being at most 5' long in the body. But that doesn't look like a 7HD monster.
Posted by Roger G-S at 11:02