Not much time to update the wizardly stuff, but I did watch a couple of really well-done Youtube videos (part 1, part 2) from a film scholar who shows exactly how the sets of The Shining have a lot of places where things don't connect or make sense: windows and rooms that can't exist, halls that come from nowhere, rooms that can't connect to anything. Interestingly enough, the spark for this analysis came from a first-person shooter level designer who found it impossible to reproduce the sprawling, mazelike Overlook Hotel faithfully in his medium. 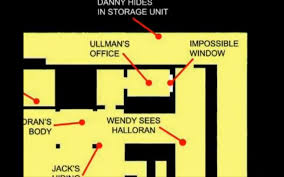 Naturally, the explorers of mad archmages' dungeons are well accustomed to these effects being produced by extradimensional spaces, undetectable slopes, imperceptibly rotating and elevating rooms, teleporters, and straight-up Escher physics. A DM can probably get away with at most one of these funhouses over the course of a campaign. After all, mapping is a minor player achievement that gives rewards minute by minute, and it should only be pulled away with calculated cruelty.

All the same, it's a great moment when the party realizes ... hey, wait a minute, it's not the map that's wrong ... it's the dungeon that's wrong.