Cards have been recognized as a great way to keep track of spells in a fire-and forget system since at least 2nd edition D&D. My insistence in the current campaign that each spell be castable only once a day makes this even easier, with no need for duplicates. Maybe, in fact, I'll work up some spell cards for those rules and my players.

In the meantime, here are spell cards for the 12 magic spells that are all you need to play the one page starter rules (see here and here). The way these spells are going to work is almost tailor made for cards - or so I realized. You know as many spells as you have written down in your book, which varies with your intelligence and with how many spells you have found during adventuring. You can take a certain number of spells with you each day, ready to cast, depending on your level and intelligence.

When you cast them, you turn them face down; the extra moons and hourglasses are to paste on the back of the card so you can see when they'll be recovered. Spells require either 10 min (hourglass) or a full night (moon) to recover; I've ditched the at-will casting for now, finding it hard to balance. The number at top right is the minimum caster level at which the spell is available. That's it; no such thing as "spell levels", or rather, those equal caster levels. 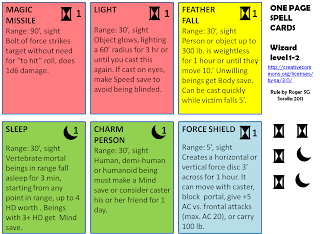 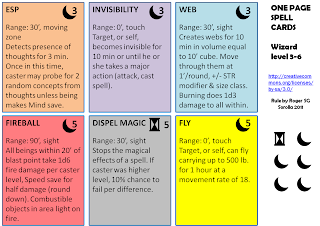 In the next couple of posts I'll fill in the wizard class with the actual spell rules and with ... Lab Abilities.
Posted by Roger G-S at 23:12