Quick, name the animated Disney film that was released with female frontal topless nudity, breasts, nipples and all. 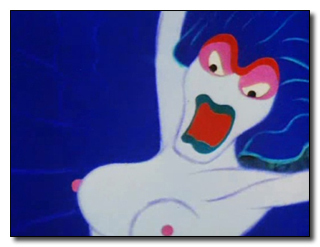 Apparently it was OK for Fantasia's harpies to swoop into your face topless, and for various she-centaurs and fairies to have exposed boobs (sans nipples and mostly covered up afterward with halter tops, but yeah), and for baby cherubs to fly around bare-assed. What was up? Wasn't this the Hays Code era of draconian film censorship?

Well, here's the list of things prohibited by the Hays Code:
Aren't you glad they banned both racism and miscegenation?

Absurdities aside, what's remarkable is how hedged around with qualifiers the nudity language is. It almost seems like it's making room for artistic, innocent, and high-minded nudity; making room for children's butts, as long as they don't turn around.

And indeed, censorship has for a long time tussled with the artistic exception - Christian body shame against Renaissance glorification of the nude, played out in a myriad different arenas from the Sistine Chapel's "breeches makers," to Comstock's crusade against the New York Artistic League, to the final bursting of the dam in the 1960s. As much as prudes read salacious interest into high art, high art was itself used as a stalking-horse for titillation; like the high-minded, body-stockinged "tableaux" deployed for the entertainment of gentlemen in the music-hall era.

It's against this backdrop, still within living memory in the 1970's, that we have to consider the much-commented nudity in early gaming materials. Like this harpy: 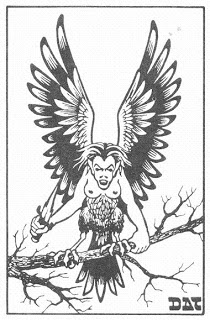 Was this kind of depiction considered as harmless to children as the Fantasia harpy? What has happened to our culture in the intervening generation? Why the Janet Jackson-level shock today? Aren't we supposed to be living in the Most Sexualized Times Evar? These questions and more must, alas, await the next blog post.
Posted by Roger G-S at 12:00