I was not in the UK from 1987 to 1994, so I missed what looks like the ultimate cheesy dungeon meets TV game show experience: Knightmare. Here's an article about it by Ellie Gibson from the Gameological Society. 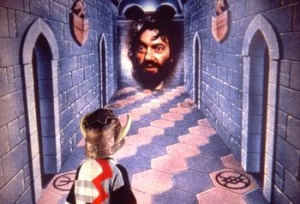 In fact, it looks like a lot of recurrent old school gaming themes made it into the show. From the article:

Surprises for the DM!


“There were no rehearsals, because you couldn’t rehearse the children, otherwise it would no longer be a contest. We did no retakes, because again, you would have been making them into actors, which they were not. The actors in the void, as we called it, had a very hard job. They knew roughly how they were going to guide the children, but they didn’t have a script. They had to improvise. That sounds fine, but remember, you have to keep those kids on track. [The production team] tried to work out every possibility the kids could come up with. But they never did. The kids always came up with something they hadn’t thought of.”


For instance, in the show’s first season, the path chosen by the contestants determined which rooms they would encounter, forcing the writers to prepare for all the branching possibilities. “Progressively we realized, of course, this wasn’t necessary, because the kids didn’t know. Whether they turned left or right, we could use the same scenario. So then I didn’t have quite so much to cram in.”


But part of what made the world of Knightmare feel real was the fact that unfair, arbitrary things happened within it. This set it apart from other game shows, as did the absence of a scoreboard or competing teams. The challenge was to stay alive. And unlike in computer games, there were no extra lives or “CONTINUE?” options. When you died in Knightmare, you really died.

No doubt if this show was produced today, it would have railroaded story lines, oodles of hit points and healing, and consolation prizes for all. Meanwhile ... well, I have to write what I know. New York area kids in the 80's, looking to participate in TV shows that simulated video games, had to make do with this: