Dragonmeet 2012: Heart of the Sunrise

Dragonmeet is a one-day small gaming con that's held in London around this time each year. Having been there as a player last year, this year I vowed to return as a gamemaster.

The table ended up filled with fans of the blog, including two folks from the L5R days and Paolo of Tsojcanth fame. Paolo brought his 52 Pages gnome, Gnaro, who had last been sighted in Mittellus-Prime and had somehow moved sideways in time to Mittellus-15087, which featured an alternate, rebooted version of the dungeon I had restocked using Dyson Logo's Purple Worm's Gullet map.

Memorable events in this run, entitled Heart of the Sunrise in true prognard fashion, included:

The party tarrying to collect the valuable claws of the hopping piercers not far inside the gullet, and interrupted by the appearance of the wyvern who had been nesting above the dungeon entrance. It wasn't long before the wyvern fell victim to an astounding series of events. It fumbled with its stinger (natural 1, 1/20 chance), went on to roll a fumble of 5 on the lower of 2d6, hit self for 1/2 damage (1/12 chance, increasing the odds to 1/240), lost my 50-50 determination roll of whether it was immune to its own poison (1/480), failed the first save vs. incapacitation I give victims of poison, which it would have made on a d20 8+ (1/1200) and the second save against death (1/3000) - both by one point, rolling a 7! So the wyvern arched around and, being clumsy in such confined quarters, stung itself in the eye and expired on the spot ......

Losing 3 party members to incapacitation and maiming. Tip: When making jokes about two suspicious-looking lizard statues possibly coming to life, interpose someone solid between them and the squishy characters!

An encounter with a mirror hidden in the room under the vertically rotating door under the dwarf youth hostel, which the Mittellus-Prime party had missed. This one will deserve a post of its own - the mirror was a special creation and it played out really well.

The final encounter with the shrine of the titular glowing ruby. The Band of Iron, being campaign characters with something to lose, were content to merely revere the fabulous gem. Not so these one-shot scoundrels! The party rogue used his Oil of Invisibility, lassoed the gem successfully, and then the altar turned into this and all hell broke loose: 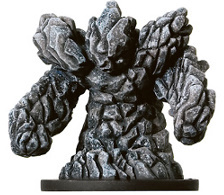 What followed was the first time I have used the new chase rules and they worked like a charm. The rogue and gnome, who used pixie dust from a previous campaign to fly,  could double the creature's speed ... but they had to thread the dungeon, while it could move through stone at no penalty. It cut them off and the rogue only barely slipped past with a lucky roll of 2 from a quite-likely-to-hit rockhead. Still, a grim pursuit from a relentless, untiring opponent who seemed an infallible tracker seemed likely, so the rogue threw the gem to the flying gnome ... and the rock-thing stopped in confusion.

How long can our "garden-variety gnome" hero keep the gem aloft and away from the senses of the elemental guardian? That, alas, must await another chapter of his dimension-hopping saga. I want to thank all my excellent players for a truly memorable game with a rousing climax!