You're going to regret not putting your campaign in historical Europe when you hear about the Mundus Subterraneus of Athanasius Kircher. You may even want to put that book in your campaign regardless - a tome of strange lore containing dizzying hints and tidbits about the world below..

Like the Utriusque Cosmi of Robert Fludd, Kircher's two-volume work from 1664 hurls together a vast array of topics that today sit in very different buildings on campus. He tells us of geometry, physics, geology, astronomy, alchemy, even the reputed magical properties of gems...

but the emphasis keeps coming back to the "subterranean world" of the title, with how-to on mining and metallurgy, and a section explaining fossils as forms spontaneously generated by the earth - a precursor, perhaps, of Richard Shaver's strange ideas. There is a particularly rich section in the middle where Kircher describes his adventures in the craters of active volcanoes, and then indulges in sober speculation about the networks of fire, airy caves and water spanning the center of the earth, leading eventually to Hell and possibly Purgatory ... 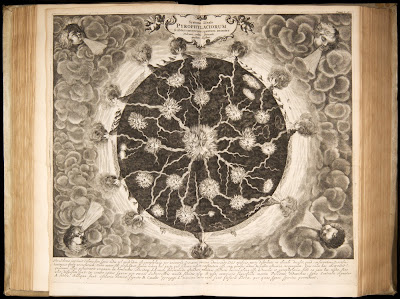 and lays the seeds for generations of hollow-earth fictions and crackpots to come with lengthy passages about the underground ocean that creates the tides, and the creatures that lurk within the underworld - races of subterranean men, giants, demons, and several species of dragon and basilisk. 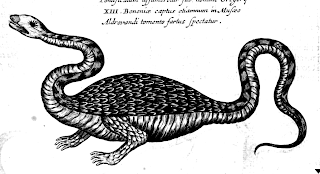 The possibilities for pseudo-historical adventure campaigning under the assumption that Kircher's ideas were mostly true cannot be underestimated.  Fantasy writers from Verne to Burroughs to Lovecraft have resonated with Kircher's "underdark." Even early on in the D&D universe, the existence of a vast network of tunnels and dwellings deep underground provided a logical continuation for players who had exhausted the depths of their local dungeon. What makes the better endgame, I ask: becoming lord of a castle and hearing the grievances of peasants all day, or equipping for the ultimate delve down rivers of flame and straight through the gates of Hell itself?

Articles and posts on the Mundus: