Nowadays we take this kind of graphic for granted, as a staple of the more highbrow kind of serious news outlet:

The style has a name. It is ISOTYPE, a movement that most people probably don't even know was a movement, let alone its connection with social democratic ideologies in 1930's Germany. If you've ever been told in a statistics class that icons should illustrate quantities by varying in number, not size, you've learned one of the main principles of ISOTYPE design.

The influence, indirectly, on my own 52 Pages approach can't be underestimated.

Maybe it's a little incongruous to illustrate rules for adventures of swords and magic using a Modernist graphic language developed in the 1930's. And maybe not - considering it's not the real ancient world or Middle Ages our games are simulating, but fictional products of 20th century fantastic writers. ISOTYPE is industrialization, but also does surprisingly well at accompanying the standardization of pulp literature into rules and monster statistics. 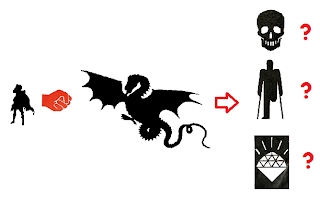