It's A Hard Game


Will Dungeons and Dragons be the next [insert high-impact fantasy franchise here]?

This article in TIME is a better-than-average mass media assessment of D&D's impact on the popular landscape.What I appreciate is its clear analysis of the game's simultaneously pariah and ubiquitous status. D&D has a clear and massive legacy, a definite mandate as a cultish hobby,  but an uncertain future as a mass phenomenon. 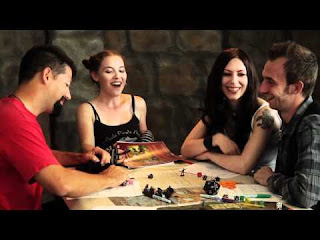 I sometimes think the often-repeated cries for these kinds of games to regain their fad status are misguided. The days when people just broke out the D&D and played were days without wide access to more immediately involving interactive games. Let's not forget that tabletop games are hard. They can be hard in an easy way or hard in a hard way, to be exact.

The easy hard way is playing with the tons of rules that some approaches to gaming demand. It's easy because it requires the same cognitive skills as understanding how to play Monopoly or World of Warcraft, just multiplied by a factor of however many. It sometimes seems unnecessary when you can play computer games that take care of the drudgery, but nonetheless we see people drawn to the rule-based approach because they have the brainpower, the obsessiveness, or the ability just to sit back and let other people coach them.

The hard hard way is letting go the rules, finding a gamemaster who is capable of doing more than we did just breaking out the rulebooks in high school, and accepting his or her authority. The "authority" part is the really hard part, especially for adolescents. I know I remember things that way, anyway. In fact, the revival of stripped-down D&D may be a better thing for parents playing with their young kids and friends. The chain of command is already clear there. The kids don't demand much in the way of continuity, emotional depth, grandiose sociopolitical thematizing, and other quintessential adolescent ohmygod-so-serious concerns.

As I've argued before, we could get more players for our games if we made it clear that the DM handles most of the rules, and you just tell us what you're doing and how - but that assumes enough maturity on the part of the players. I don't know, I think we can get enough of those players to come around. It might take a shortcut around the stigma - call it the "survival game," give them modern equipment and problems, only slowly introduce the weird. Or the hell with it, embrace the weird, let your own maturity as a person open eyes and make it okay for them.