Slake My Ennui With Monsters

Is it OK to come out? Have the joke posts stopped?

I am dissatisfied with the dungeon monster encounter tables I have created for my general use (see Old School Dungeon Encounters on the right) because when I port them into javalinks I come to the realization that "2d10, lowest" = 20% of encounters being giant rats, etc. 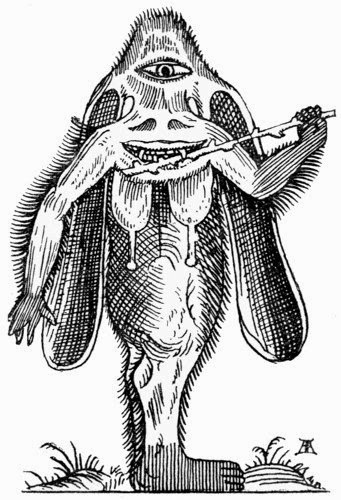 This is fine when I stock dungeons. For example, if something seems boring or trite to me I give it a twist, using the stats but changing the presentation. In an ancient complex with synthetic-men bodyguards I had ghasts become spoiled examples of synthetic men exiled to their own chamber and with acid touch instead of paralysis. A rust monster becomes a rust lizard - they'll never see it coming! And so on.

But I can't program that into javalinks. In short, those tables are based on a very Monster Manual-centric world with occasional weird peek-ins from the other AD&D books. I want more variation, while still keeping some things more common than others.

Assume I've dug deeper and brought in most of the non-awful monsters from Fiend Folio and MM2. I also own Realms of Crawling Chaos, and the Cthonic Codex monster book. Tome of Horrors mostly overlaps with the classic books, and really would only be useful if I needed specific stats toned down from AD&D to Basic/Original level. Apart from that, what D&D-based monster books or sources do you think are good, again avoiding 3rd or 4th edition statlines as incompatible with the older editions?
Posted by Roger G-S at 00:01

Email ThisBlogThis!Share to TwitterShare to FacebookShare to Pinterest
Labels: monsters