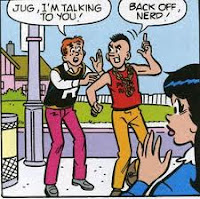 Old-school gaming is not the only nostalgia of my generation, no sir. Andrew Weiss of the music/comics blog Armagideon Time has unleashed Comic Punx, dredging up those super-wack takes on the Punk movement to be found (mostly) in mainstream comics from the 80s.

I mean, some of these portrayals make that Quincy episode look like MRR.

And the funniest thing was that back in the day, the people with mohawks were not the ones to watch out for. They were usually "peace punks" or at the worst, self-destructives. All those 80's comics artists should have been drawing skinheads for their go-to street goons instead.
Posted by Roger G-S at 19:11