I'm thinking over all your staircase solutions in the comments from last time. In the meanwhile ... 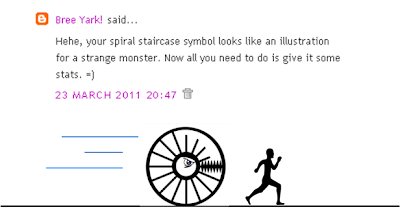 Found in long, straight, flat underground corridors, this perilous dungeon beast occasionally escapes above ground, where it survives best on salt flats and desert plains. Shaped like a rolling cylindrical wheel, the juggernautiloid stands some 8 feet high and 8 feet wide. From the side, it appears to be made up of overlapping segments, like a nautilus shell, except the segments are articulated; one pair can open up to reveal a mouth full of sharp, siliceous teeth. The beast itself has a hard, rocky carapace, and independently rotating eyes on each side of its body.

Sight, though, is not its best sense. Its powerful echolocation can detect intruders at a distance of over a mile in a tunnel, or 500 feet in open air. When it senses prey far away, it starts to flex its segments, beginning a slow, rolling acceleration; the first round at 30', the second at 60', and so on to a maximum speed of 180'. It prefers 10' corridors that it nearly fills, so that prey cannot escape. It can also brake at 60' per round. In spite of this, if the creature hits a wall it takes damage equal to 1d6 per 30' of speed it was going at.

The roller's attack normally just crushes prey, to whom it returns at leisure to scrape up with its bottom jaw. But a "to hit" roll on a multiple of 5 instead involves being hit by the mouth segment and swallowed whole. From inside, a being armed with a sharp weapon can attack the juggernautiloid, whose guts have AC6. But attacks take -1 to hit per round inside, while gastric juices do 2d6 damage a round with no save.

The juggernautiloid was reputedly created by a wizard seeking to raise awareness about mental illness. Tall tales circulate among deep dungeon explorers: if trapped in an area without long passages, the juggernautiloid will lie on its side under a shaft and seek to trap prey by extending its segments up, in mimicry of a spiral staircase. Experienced adventurers refer to long corridors prowled by these creatures as "roller derbies," and the flattened remains of crushed armor they leave behind are "roller coasters."
Posted by Roger G-S at 15:12