What do we want in a map? 2: The Jagged Edge

The classic stair map icons, as shown in the 1st edition Dungeon Master's Guide, were one kind for going down (here, shown on the left) and another for going up (on the right): 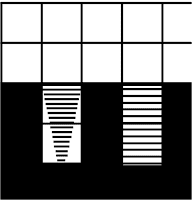 That's fine if the stairs run off into their own little passageway, as in these examples. It's clear that the one on the right is heading up from top to bottom, for example. But then you get the stairs in the middle of a room:

Which way are the stairs on the right going? You can't tell because the "up" symbol isn't directional. So let's just use the symbol where the lines get smaller in the "down" direction. That's what the latest edition of D&D suggests, and that's the symbol on the left.

Except now you have another problem. You can't tell whether the stairs are going down to your level, or going down off your level. It looks like all the standard stair mapping ideas have something ambiguous about them.

Enter my solution: the jagged edge of reality. 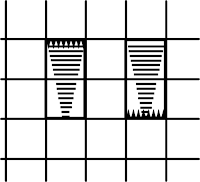 This edge - really, a bunch of triangles glued together - tells you which end of the stairs goes off the map, to the next level up (if the wide end) or down (if the narrow end). You can also use it when a passage goes off-map, connecting pages of a mega-dungeon, for example.

And spiral stairs. Well, those are their own special fun, because it also makes a difference which way they spiral. Do you come out at that square of floor, or this one? Yes, back to obsessing about handedness again.

Here's my solution. It has a kind of quirky charm, I think, even if it's maybe a little busy for the classic old school feel. The two jagged edges show you that it leads both up and down from this level. The narrow end shows that you keep the pillar on your right as you descend. That means any bat that flaps at you is going to hit your shield...

Well... I still don't know. It kind of looks like the result of a freak accident between Sputnik and Charlie Brown's sweater. Anyone have a better idea to show the verticality and handedness of a spiral stair?
Posted by Roger G-S at 23:34