Egg of the Gazolba I

Finally making good on my promise last month, I'll be sharing a non-violent adventure idea over a series of posts, populating it using my problems generator and tricks generator. Note that violence is not necessary in the adventure, but can break out if the players mess up a couple of situations.

The recommended party level, too, is variable. Interestingly, it is not so much skills and character levels that would make the adventure too easy, but access to the kind of powerful non-combat spells that usually are turned down in favor of fireballs and the like. I would hazard the general observation, too, that this kind of magic is a major consideration in any adventure where tricks and problems predominate.

At the end I will produce a map, which will also be an opportunity to share with you another feature you've asked for - my adventure mapping system and the Powerpoint mapping symbols that go with it.

Introduction (and with apologies to Clark Ashton Smith) 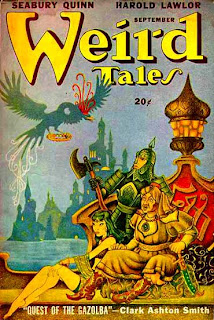 The legitimacy of the Sultans of Janpore finds embodiment in the person of the Gazolba bird. About the size of a goose - in the same way a gazelle is about the size of a donkey - and plumed gorgeously in green, red, violet and white, the living Gazolba, only specimen of its kind, literally sits on the head of the true and rightful Sultan on occasions of state; a heavy, serene diadem.

When the Sultan sires male offspring, the Gazolba lays a single, parthenogenetic, opalescent egg. The clutch corresponding to the Sultan's sons lies in a heavily guarded nest in the Carnelian Palace. In the case of the present Sultan, Zadir III, there is only one egg, and the heir is six years old.Young Zadir IV knows that when his father dies, so will the present Gazolba, and a new Gazolba chick will hatch for his own crown.

All these peculiarities of the Sultanate are known to the party, who have been sojourning in Janpore a few days. In good time, a well-fed man, disguised in garb of a commoner's cut but far too well-maintained, seeks them out in their inn. He introduces himself as Arouf, the Sultan's vizier, and proposes a mission that only strangers to the city could undertake, for nobody would believe their story were they to tell it.

It seems that a secret calamity has befallen the palace. The egg of the Gazolba has been stolen - replaced by a painted duplicate. This was noticed by one Mambrun, a palace guard. Only he, Arouf, and Arouf's confidant, the female cleric Yeshaim, know of the theft, which would spell calamity when. It was she who cast the divination revealing that the egg was hidden in the abandoned pleasure tower of the long-departed Blue Witch Xadiva, which sits atop an unscaleable cliff, half a day's journey from the city. The only way in is through a number of caverns in the cliff's surface - but which cavern leads eventually to the tower is unclear. The way to the cliff, however, goes through the Sultan's private hunting forest, which is patrolled by a vindictive and implacable game warden, a half-elf named Vran who is a faultless tracker.

Arouf has arranged for a distraction tomorrow in another part of the forest which will occupy Vran, but otherwise cannot risk any involvement with the caper. The reward to the party for the safe return of the egg is at your discretion; gold, jewels, a ship, or more cruelly, immunity to prosecution on trumped-up charges concocted by Arouf himself. In parting, Arouf makes a cryptic comment about "tests, dangers, and oh yes, fabulous wealth" said still to reside within the pleasure tower.
Posted by Roger G-S at 14:02