Telecanter came up with a version of my one-page wilderness map that looks just great, with silhouettes. I'm building on it to get some of the useful information back on the hex while staying true to the iconic form. Range and day/night activity collapse into one hexagonal icon, blue dice-side icons provide the roll for number appearing. Total in lair, as well as "uh what exactly does this stand for again" can be subsumed in key notes for that hex's number (which Hexographer supports). 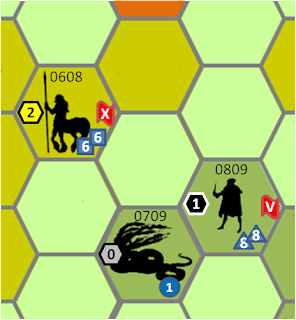 I also added a red flag icon for simple leadership structure in human-like groups. Roman numeral gives the number appearing that will include a leader of level (base +1), and doubling that will give further increases in the level of additional leaders encountered. For example, the bandits in the forest (V) are base zero-level, but have one level 1 figure for every 5, a level 2 for 10 or more, a level 3 for 20 and so on. If there are 5 bandit patrols averaging 9 each then the boss of all 45 bandits should be level 4.

Silhouettes for every monster, really? Well, it would be cool for other reasons, but I know of some resources that provide a start. The graphic fonts WWFantasy, Imaginary Forces, Mythologicals One, Mediaeval Bats, SL Mythological Silhouettes, and Time Warriors are all free, for one.
Posted by Roger G-S at 09:25