It's Delta's in-depth recounting of a run of Glacial Rift of the Frost Giant Jarl that has me thinking again about saves and hit rolls (previously on RRR), and in particular the part about giving monsters saves against critical hits:


Since the "save" is in the hands of the target, the player doesn't potentially "fail" at a confirm roll to end their round on a sour note (instead, the experience is that the monster target managed to skillfully avoid a potentially devastating strike).

Common wisdom has it that the more rolls a danger resolution has, the more bogged down it gets. Simplicity is the grail, so two-roll combat is great and if you can get it down to one roll so much the better. Right? 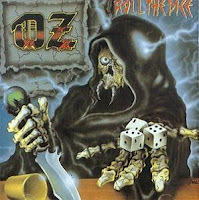 Well, the one-roll versus two-roll debate rages in the halls of miniatures wargaming, from where the concept of the saving throw came. And here we find - as Delta found - that some people like distributing the rolls between the players. The reason in wargaming is slightly different. In a game with dozens of figures on either side, it's desirable to have both players engaged in the action at all times.

In a smaller, skirmish sized game with less of a player downtime problem, it may still be desirable for both sides to roll dice in any given resolution. Influential systems like Runequest and GURPS have taken this approach, and there are a couple of benefits:

1. Probabilities work out cleaner. For example, in one-roll standard 20 combat, a -3 to hit when you hit only on a 17 means you will be doing 1/4 of your average damage per round, as 3 of your 4 hit chances on d20 are taken away. But a -3 to hit when you hit on an 8 means your hit chance goes from 65% to 50%, reducing your average damage only by a third. This makes rules like "you may take -2 to hit in order to get +2 Armor Class" subject to game-y thinking in a single-hit system. For example, a well-armored and skilled fighter against a weaker for should always take this option, because it hurts the enemy much more than it hurts you. Bonuses or penalties to a separate defense roll, though, are not affected by "to hit" probabilities on attack.

2. More interactive feel. Delta's observation is sound. Who rolls the die can make a psychological difference, and having both sides roll allows the most give and take between the players and the "world."

One way to keep things simple is to divide up the task in the classic D&D manner, so that for combat the attacker rolls, but for dangers and traps (and crits in Delta's game) the defender rolls. 4th edition divides things up somewhat differently. Saves are now reserved for trying to break free of ongoing effects like poison or slowing, while things like traps and spells make attacks.

There's also the solution I came up with for my dodge defense rule (here, bottom right of sheet) only to find that Errant RPG has a similar idea. Forget  the weaksauce +2 to AC that 1st edition gives you for giving up your whole attack. I answer the question "why can't you save against a melee swing the same way you save against a spear trap?" by letting characters do just that - if they dedicate themselves to concentrating on defense instead of attacking. By replacing the attack roll, the total amount of dice slinging is kept constant.

Anyway, the basic design lesson: while fewer dice often means more, fewest is not always best. There are good reasons to get people involved in both sides of the dice ritual.
Posted by Roger G-S at 00:57