Under Tree and Over Hill

In Friday's session the players took a lead I had been dangling, and while the explorers didn't go into the dungeon, there was action in the other "front" of the campaign - the strange doings in the woods - and a new "front" opened up - a business venture that had been proposed by an NPC that began a trek through the Durrn foothills. All of this will force me to sharpen up my game about outdoor encounters. While I managed to run the session adequately with some random encounter table rolls, I also found myself wanting more control over the environment, as I would over a dungeon or other adventure.

Zak has the insight that there are two kinds of outdoor experience for characters: going from point A to point B, or systematically exploring and scouring a chunk of wilderness (also see ChgoWiz and comments on the topic). I'll add to that three different ways you can handle encounters in either situation:
For one-shot travel that effectively changes the home base of the party, sure, I could see using number 1. For a scenario whose point is to explore a wilderness, I could use number 2. But for the wilderness surrounding the home base, where many journeys from A to B are anticipated, I'm going to be using number 3.

At any rate, on returning from Utherton the party heard shouts coming from the lumberjack end of town and found one group of lumberjacks arguing with another in their foreign language. Lucille the carpenter filled us in on the story - apparently one group of lumberjacks, the Busiacquo brothers, had been felling some "elven trees" whose wood was uncommonly strong and workable. The other lumberjacks didn't like it. Jessera saw this opportunity to cast her newly learned Detect Magic spell on the timber, which was going into the crude furniture Lucille had been making for them, and found it radiated a faint magic.

The party decided to take the wandering opportunist, The Nameless One, up on his venture to re-establish a trail to the human-dwarven hill town of Saddleback now that the bandits from the Castle were gone. They let him buy trade goods and mules while they went into the woods to see if they could make contact with Burnsteen the Wood Warden. They reached their limit for the day approaching an area where the birds were singing especially loudly. Turning back, they soon found an elf patrol, whose bristly stance softened somewhat as the party dropped Burnsteen's name. The elves said they worked with the Wood Wardens cordon around the unnatural tree that had sprung up in the forest, told of the evil influence that it spread among the forest, and curtly warned off the woodland amateurs from the vicinity.

Returning, the party found Nameless in possession of several bushels of apples and a large stock of the Busiacquos' magical wood, which they had apparently let go at a bargain price. Now warned by the elves, Boniface cast his Holy Light spell, which also functions as a barometer to detect evil, and found indeed a malign influence. He used his Purify powers to free a sample of the wood from its taint, to the awed witness of the village's lumberjacks. And on the next day they set off, following the landmarks that Doug the dwarf bartender, a native of Saddleback, had given them. 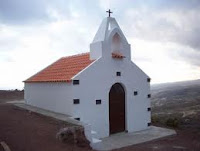 The first of these was a hilltop hermitage, in quite good condition (courtesy of Jim Pacek's Wilderness Alphabet) and empty except for the grave of one Mallory, a member of the Greatest Adventuring Party Ever Known, and a painted altarpiece. It showed the messianic figure of the religion of Invictus, the coming New Man who will be the founder of the Fifth and Final Race of humanity. Strangely, the scene at his feet included the Castle of the Mad Archmage. Even more strangely,  although the picture looked decades old, it included the black and white tower with moving bricks that had newly sprung up in the Castle's Black Courtyard. Nobody knew the old High Tongue to understand what the scroll by the New Man's mouth said, but it was faithfully copied down.

Staying overnight in the hermitage, a random encounter was rolled in the second watch. I guess the elves were not enough for one day, because the dice came up dwarves.  Of course, they had to be dwarves from Saddleback who had precisely the same idea a couple of days earlier, and were bringing the goods of Saddleback to Trossley. Had these stout members of the Badgerleaf clan had any encounters on the way? Roll, roll ... oh, just a hill giant that they hid from.

This was a fun session even though it went by without any experience or combat for the players. It's pretty typical of how I wing things - the wood plot element was thought up in brief form the previous day, the trade scenario had been brewing a while, and I'd actually had a completely different set of developments in mind if the party had decided to go back into the castle instead.

More on my outdoor system next time.
Posted by Roger G-S at 10:55