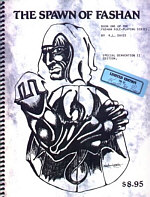 See, since back when I read Lawrence Schick's review in the April 1982 issue of Dragon (p. 76), which ended up explaining this ill-conceived RPG as a parody, I always assumed the review itself was an April Fool's joke on a nonexistent game.

But over the years, Dame Experience has since taught me that there's no satire like reality. Information about SoF is surprisingly light on the net, but it looks like it was a real game.

It's reviewed at length on RPG.net.

Older and wiser, the game's creator reflects on his 15 minutes of fame.

As I noted reviewing bad monsters, there's a difference between "flamboyantly awful" and "just awful." In hindsight, Spawn is just your garden variety, poorly edited, simulationist-preposterous attempt to improve D&D. What's sad is that the championship belt of "worst RPG ever" has since gone to systems that topped  bad design with worse social attitudes. The fate of such should be obscurity, not the notoriety they crave.

PS: Speaking of "just awful," have a gander at the carefully segregated official April Fool's content in that Dragon magazine issue. Um ,wow.
Posted by Roger G-S at 08:13