Followers: Your PCs are Adventurers

Followers - henchmen and hirelings - represent the sort of people who would follow a rootless adventurer into danger, and the limits on them in the One Page system reflect this.

One principle I'm following is that player characters have the class of "adventurer" modifying their role as a fighter, wizard, priest or whatever. NPCs are not playing by the same rules as PCs; they don't get experience the same way, shouldn't develop a raft of hit points on the basis of 30 years of scholarly research, may have skills and talents that adventurers never have the time to develop. So, I ended up limiting PC background skills so that adventurers don't become the craft mavens, alchemy brewers, and whatnot of other systems. You are adventurers, you pay other people to do that. If you were brought up as a beekeeper you might be able to get a discount on beeswax, but you're a failed beekeeper so your time is not best spent running a hive.

Likewise, when it comes to leading small armies around at 2nd character level, you won't really get a horde of hundreds following you unless you're backed up by some larger assurances. Maybe you're a captain in a governmental army, or the son of a duke. Maybe you're a bandit leader who started out as a rootless adventurer, with only a few henchmen and hirelings, but your successes, and your ability to offer a steady and relatively risk-free living, attracted more and more men.

The nuts and bolts of recruiting will be covered in the One Page village and town supplements. I see those as a way to codify some of the generic assumptions of what you can get in small and large campaign settlements. 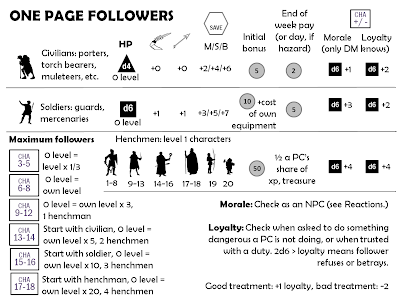