Do Split the Party 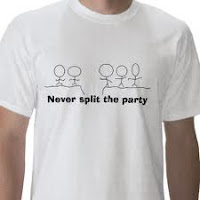 Another Adventure Gaming Society club Saturday and a group of four players - no repeat visitors - rolled up characters to enter the freewheeling Mad Archmage's castle using One Page rules. In which it was revealed that sometimes splitting the party is a good idea. How? Read on ...

This was a party of experienced D&Ders who knew their stuff. Because they were only four in number (hunter-elf Alvissa, historian-cleric Father Robertson, mountain-hunter-fighter Freya, ex-military-outlaw-fighter Mikhail), I let them hire a man-at-arms, made up on the spot - Ivar the zero level fighter, whose distinguishing characteristic, as the elf's player produced an orc miniature to represent him, was that he was as ugly as an orc and in fact sometimes mistaken for one. This was to prove very important later on ...

Approaching the castle, they elected to avoid the main gate and headed for the bastion on the south wall. One bandit appeared and starting chucking rocks at them, followed by five more. Crouching behind the fighter's upraised shield, the band ran up under the battlement and the elf threw up a rope and grappling hook. The roll was a natural 20 ... so what else could happen but that the hooks caught one of the bandits crouching behind the battlement in the eyes?  As he screamed and wailed, she cast her one Sleep spell, and he and most of the other bandits fell silent, then the unfortunate hooked man came tumbling down and hit the ground with a loud "snap."

At this point the party decided to split up. The priest, being roleplayed as a somewhat doddering old fellow, had the genius inspiration to dodder around the bastion's corner and see if there was a door. There was. He convinced the fighters and man-at-arms to come with him while the elf shinnied up the now securely attached rope to slit throats.

Meanwhile, the priest of Kronos took his sickle-shaped sacred axe and started hacking at the door to the bastion. As he made progress in chopping through the wood, the elf up top was interrupted in her grim task by the arrival of four more bandits, who had been roused by one bandit who'd escaped the sleep spell, and their half-orc leader, the notorious Grainne the Bandit Queen. Acting quickly, Alvissa shinnied down the rope, but not before taking one more sleeping bandit out.

At this point the remaining bandits quite understandably ran to the edge of the parapet and hurled rocks at Alvissa, who took a bad immobilizing body wound. Hearing the commotion, Ivar and the fighters rounded the corner and ... Grainne, with one look down at the mistaken-for-orc Ivar, rolled a high reaction, took a shine to him.

Played by the unconscious elf's player, Ivar introduced himself as "Ivog," got the fighters to haul off the elf "for eating later" and expressed an interest in joining the gang. The bandit who had run away recognized Ivar, but he was quick to accuse the unfortunate fellow a traitor. When Grunnya approached him, he fled, and the other four bandits ran off after him.

Meanwhile, the priest had hacked through the door and revived the elf, and together they entered the bastion, with its complicated architecture of stepped levels and towers. There followed a tense episode. The rest of the party was led to the inner courtyard to be sworn into the gang. Priest and elf took to skulking, exploring and picking off isolated bandits sent to fetch brandy. In a final climactic betrayal, with party out of magic and all but two bandits dead, everyone turned on an isolated Grainne. Luck was with the group that day, for they felled the mighty bandit queen and lost only the unfortunate Ivar, who took the full fury of a half-woman betrayed, dying of shock as the party cauterized his severed arm. The bandits even left a cart and horses to haul all the loot back to town.

Could this group of five have taken on a third level fighter and ten zero-level bandits in a face-to-face fight? Doubtful, especially with the reduced power of the One Page sleep spell. Splitting the party into a deception wing and a stealth wing turned out to be just the strategy, although I'm not sure how much it was arrived at on purpose. Also helping was the open-roofed architecture of the bastion and the loud voice of Grainne, so that the stealth commandos had a way to know what was going on.
Posted by Roger G-S at 10:42

Email ThisBlogThis!Share to TwitterShare to FacebookShare to Pinterest
Labels: castle of the mad archmage, play report