After a languid summer I'm ready to enter the home stretch and put the final touches on my 52 Pages house rules. Scrap Princess' review reminded me that there is always a gap between the clever system you think up at home and what actually goes down at the table. Indeed, I had some stuff in there that bore little resemblance to the way I actually play, like the "encounter start" matrix that was my substitute for surprise rolls.  So I managed to boil it down to be more like guidelines than rules, and more like what I'll actually do in play - figure out the surprise status by common sense, with maybe a roll for alertness if I'm unsure of the disposition of the defenders. 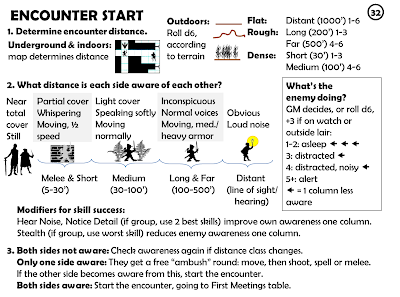 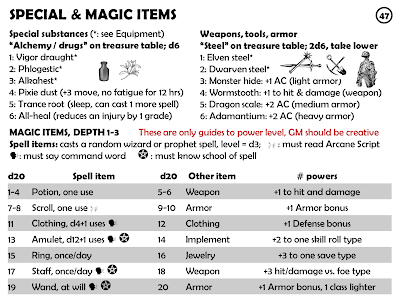 Finally, I had an insight about combat where I could get it down to fewer phases if I realized that combat should go with the most urgent stuff first - not in the order that you might think things happen. So, melee first and disengaging, then shoot, magic and move, and miscellaneous stuff at the end of the round. To handle the weird gamesmanship and panzerbush situations that might arise I allowed "overwatch" to happen so you can shoot the charging guy at close range while he is charging you. In a surprise situation, by the way, you can move first then melee.

Oh and yeah, I got rid of the grid. I still play that way but I'm pretty happy with a system that looks more spacious on the page and asks people to think about the dimensions of the fight rather than necessarily making them plot it all out. 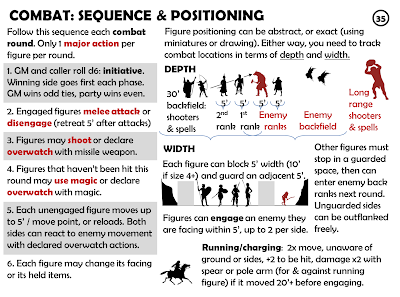 And I've made a start on the example campaign, dungeon, and play session that round out the last four pages. So some of that soon, I'm hoping.
Posted by Roger G-S at 00:03