The second great coping mechanism to stave off the Fundamental Uncoolness of D&D is irony. Forget hipster mustaches and Alanis, this sense of irony is closer to the literary sense, or the kind of "romantic irony" discussed by such writers as Schlegel.  Ironic literature is conscious of the ways in which it is art and not reality. One way to handle this, then, is joking about the gap between a lofty representation and its base material.

As soon as literature became aware of itself, it became aware of this rift, with the earliest expression being Don Quijote. I keep coming back to Cervantes because the Quijote staked out an early and commanding position at the tangled cloverleaf intersection of fiction, fandom, fantasy and moral panic. In spite of the increasingly baroque proliferation of fantasism in popular culture across the past fifty years, nobody has even tried to wrest an American Quijote out of the rich source material - wielding a bat'leth, perhaps, and defying a couple of gangbangers. Perhaps it's because the new Quijotes have a posse, a Facebook group, a con. They no longer tower in solitude over the Castilian plain, and whereas before the curate and Sancho Panza might have staged an intervention, nowadays they just shrug and go to watch The Big Bang Theory.

Three ways irony can enter a game, and reduce the self-consciousness of becoming one's character ... 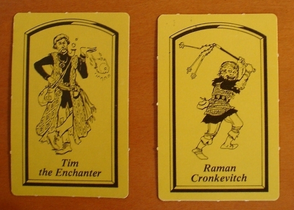 1. At its least threatening, gamer irony-lite mixes the fantasy world with references from outside. Every dwarf named Shakira, every Holy Grail gag, every "joke" dungeon level tries to water down the FUDD in the same way that National Lampoon undercut the earnestness of Tolkien with Bored of the Rings. Some of these jokes have become so reflexive that they have themselves become uncool, contaminated with the residue of gamer earnestness - see Holy Grail, above.

2. At the same time more sophisticated and more nerdy, there's ironic distance to be had in the discrepancy between the fantasy world of the game and the rules used to simulate it. Two of the most successful RPG comic strips have played with this concept - Knights of the Dinner Table showing what a group of rules-lawyering players look like, Order of the Stick showing what a fantasy world looks like when awareness and semi-awareness of the rules absurdities pops through. These jokes require the most inside knowledge to pull off, but they also work against absorption in the game by showing the artifice by which it's upheld.

3. It's also an old source of ironic amusement to hold an unflattering mirror up to the self-same daydreamer, from Quijote to Walter Mitty. The ironizer of roleplaying has the same strategy at hand, but almost always it's the other guy who inhabits an unflattering reality in contrast to the high-flown fantasy world. Thus we get the alpha-nerd stance, with its one-two of "We know enough about this game ... to make fun of the losers who play it." As self-hating and hypocritical as this attitude is, there's no shortage of it around, as witnessed by Fear of Girls, Zero Charisma, and so on. A particular twist of the knife is to interpret role-playing as inadequacy compensation, so the weakling plays a barbarian, the socially challenged plays a smooth lover man and so on.

I should also mention the rare times when irony works in favor of fictional immersion - the irony when game play fails to fulfill the expectations of fiction. The villain makes her first appearance ... and the heroes manage to find a way to kill her dead then and there. The quest of the long lost McGuffin ... turns out to have been a false rumor all along.All the same, somehow, this kind of irony also works against the self-inflicted stigma of immersion because it makes the players feel like they are taking part in something real and messy and mature, not something out of storybook land.

Next, finally: Being immersed and staying cool.
Posted by Roger G-S at 15:31