The clearest sign that Gary Gygax's World of Greyhawk was based on an earlier campaign that used a map of North America is the Lake Superior/Nyr Dyv resemblance. 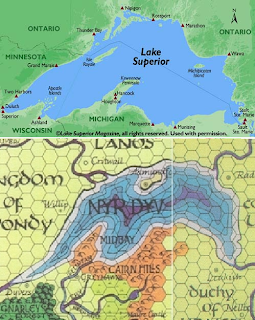 Recently, I decided to develop a little more the small campaign world that had grown up around the university gaming society's forays into the Castle of the Mad Archmage. Player-named, a village named Linton and a town named Burwell coexisted with the "Grey City" (Greyhawk with numbers filed off). I wanted the world to have the same feel, looking like a slightly different derivation of Gygax's North America campaign with an homage as transparent as the "Mad Archmage" dungeon itself.

Southern Wisconsin, then, is the new location of the Grey City, and it sits in the hills at the confluence of the Wisconsin and Mississippi. Except that, using the same translation gimmick as the Atlas of True Names, it is now at the Great Grand River and the Redley (red-lay). It benefits from brisk river trade between the realms of Blackmoor up the river, the lands of Ernst to the east, and the cities downriver.

Lake Superior: Lake of Unknown depths
Lake Michigan: Lake of Fog (undoubtedly sorcerous)
Site of Chicago: Ruins of the Stinking City
Lake Geneva: Shrine of St. Cuthbert and the location of many pilgrimages and conclaves.

But what about points south? Well, that is where the real craziness comes in. Get ready for psychic visions, conspiratoids, and Cretaceous hijinks as ... the Bay gets Woolly, next time on Roles, Rules and Rolls!
Posted by Roger G-S at 17:13