It's Not Uncool, It's Normal!

One of the ways to deny the fundamental uncoolness of D&D is to strenuously insist that it's cool. This fuels a perennial struggle to find ways to bend role-playing games into this fiction. And this struggle has gotten harder over time.

I mean, there was a brief time at the start, before it got out in the mass media, when they could make like D&D was some kind of edgy activity that all the beautiful people were doing - something like Fletcher Pratt's or Norman Bel Geddes' chic Manhattan wargames: 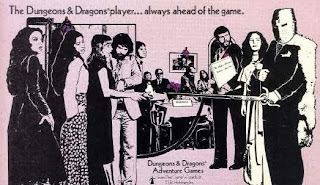 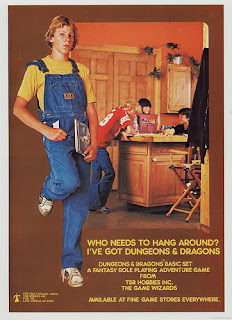 Floundering ever since the stigma descended on roleplaying games in the 1980's, two escape routes have generally been tried. One is to fight against the shallower definition of "uncool," to try and purge away the fantasy content from a role-playing game. "This game is cool because it's about real things" - or about socially acceptable forms of escapism, anyway. At this task, roleplaying murder mysteries succeed; roleplaying games about rock bands fail (because only 11 year olds imagine themselves as members of a cool rock band); and some other attempts just merit a stunned silence.

Even in the art of roleplaying games we can see the struggle between the desire to go full-on socially uncool and pimp out your game like the ultimate stoner van or Manowar album cover, or to be "mature" and "restrained" and bring it in like a Blue Note sleeve. DCC RPG, in other words, versus Old School Hack or mine own 52 Pages. This may even apply to game mechanics, wherein lengthy tables and baroque calculations represent a certain disregard for the novice, while stripped-down and simple play holds out the hope that you might get Aunt Tillie to play with you yet.

The second escape route is to accept the fantasy scenario but to deny the truly "uncool" thing about roleplaying, the immersion and identification with character. So, we get the comparisons to chess or to improvisational theater. The former implies that it's just a game of strategy played with funny pieces, the latter implies that all the play-acting is not self-indulgent or self-threatening but done with professional control for an enraptured audience.

"We're storytelling!" No you're not. You're collaborating on a story through role-taking and the closest normal-people analogy is when a bunch of drama show writers get together in a room and work out what happens next ... but each of them takes on a part from the show ... and these parts continue year on year ... Really, the only truthful answer is: